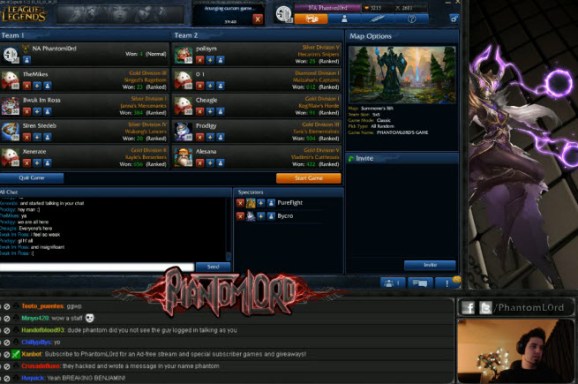 Phantoml0rd talks live on Twitch about getting hacked.

Hackers apparently went after the servers of games that are being played by a particular Twitch livestream user named PhantomL0rd. Every time PhantomL0rd tried to play games like Dota 2, League of Legends, Club Penguin, and games hosted on publisher Blizzard’s Battle.net, the group known as DERP tried to take those servers down with distributed denial of service attacks.

The hacks have been taking place as PhantomL0rd tries to play and stream the games, according to reports on Reddit and PhantomL0rd’s own Twitch stream. PhantomL0rd’s livestream is a popular channel on Twitch, which broadcasts live game sessions to large audiences. A DDoS attack can take a game down by flooding it with traffic.

The DERP Twitter account didn’t offer an explanation for why it was attacking PhantomL0rd, but whenever the group tweeted that it had targeted a particular online game, PhantomL0rd reported that his game session had been knocked out.

At the moment, his League of Legends stream appears to be back up. Speaking on his Twitch channel, PhantomL0rd proclaimed, “First time I have ever been hacked. Everyone is trying to talk to me.”

Right now, the stream is drawing more than 118,000 viewers. Apparently, being hacked is still good for his traffic. A spokesman for Twitch said that the incident was isolated and wasn’t due to any security breach with Twitch.

[Update 5:11 pm PST: And PhantomL0rd posted on his channel, “Hold on.. cops called to my house.” Maybe it’s a prank. On Twitter and Facebook, PhantomL0rd said that he had an “automatic pointed at me” and that the “handcuffs hurt.” ]

The video above shows the interaction between DERP and PhantomL0rd that preceded the attacks.