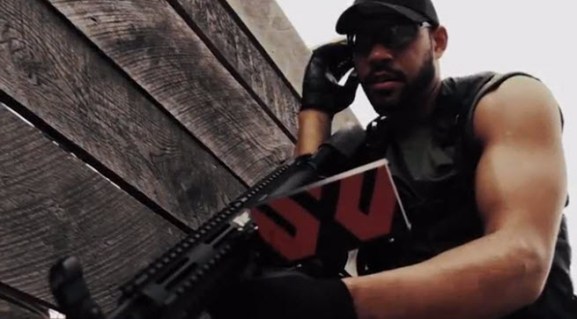 Overwatch lets paintball and airsoft players compete with smartphone tracking on the battlefield.

A new startup wants to marry the high-tech, soldier-tracking features from video games like Call of Duty to real-world combat activities like paintball, airsoft, and laser tag.

Innovis Labs has launched an Indiegogo crowdfunding campaign to raise money for its Project Overwatch. With Overwatch, players will be able to attach their iPhones to their paintball or airsoft guns and then track the real-time movement of other players on the battlefield, much like how gamers can view rivals on a minimap radar screen in Call of Duty or Battlefield military games. The creators bill the tech as the next generation in interactive and social gaming, and they hope to tap the enthusiasm of 25 million airsoft, paintball, and laser tag players around the world. 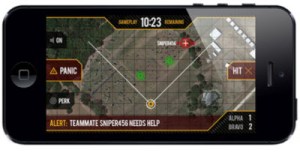 Above: The Overwatch app

“We think Overwatch can bridge the gap between real world and digital gaming,” said Josh Moody, the 17-year-old CEO of Bentonville, Ark.-based Innovis Labs, in an interview with GamesBeat.

Once it’s ready, Overwatch will let players use a live global positioning system (GPS) radar on their smartphones, which act as a heads-up displays, so they can figure out where friendly and enemy players are. It also lets them communicate via voice chat and take advantage of in-game perks such as radar jamming and spoofing your location. It will work on iOS for paintball, airsoft, and even indoor laser tag games.

“It’s an in-game utility that connects gamers with the field around them,” Moody said. “Whether I am going out in my backyard and playing airsoft with my buddies in a small field, or going out in the woods and playing on a very large field, it will work.”

On top of that, it allows someone who isn’t present at the physical location of the paintball match, such as someone lying on a couch back home, to participate as a commander via his own phone, Moody said. The commander can dispatch perks and tell players where to go, based on what he sees on the map.

The app uses Wi-Fi or a mobile data connection (3G, 4G, or LTE) to transmit and receive streaming GPS data. Moody said that the smartphones operate on something like a one-to five-second delay. That would be slow on a real battlefield, but it is plenty of time to be useful for players on a paintball battleground. The system uses a data transmission for voice chat, so it can get around the 30-feet limit of Bluetooth connections.

Moody hopes to track indoor locations and activity using Wi-Fi location-fixing methods that are available on smartphones. An iOS version will debut first and an Android version will come later. While the device to device connection is not Bluetooth, a user can connect a Bluetooth headset rather than use a speakerphone interface. 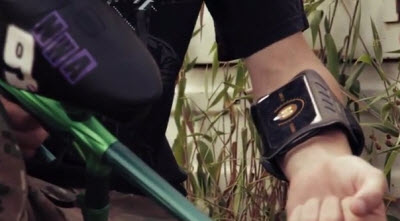 Above: You can strap a smartphone to your wrist and play paintball as if you were playing Call of Duty.

Moody came up with the idea two years ago. His father, David Moody, serves as chief operating officer. He advised his son to meet up with the owners of a software firm, RevUnit, in Fayetteville, Ark. They met and figured out how to collaborate on an app to create the features of Overwatch for paintball.

They applied to and were accepted as one of 10 startups to go through the ARK Challenge, an accelerator program in Northwest Arkansas. The team received $20,000 and went through the program in Fayetteville for 14 weeks. Now they’re raising $50,000 to complete development of their app. If the team hits its target in the remaining 28 days of a 45-day campaign, it will add new game modes beyond the basics. So far, Innovis Labs has raised a total of $170,000 to get this far. Altogether, Moody has eight people working on the project, and they have partnered up with Cybergun, the largest airsoft gun company in the world, who will help publicize the app alongside its products in retail stores. 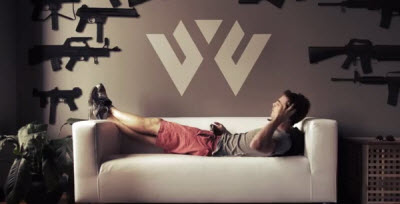 Above: Overwatch players can play from the couch, too.

Overwatch will be available as a free download, but the company will sell in-app purchases for perks like radar jamming. Players can buy those powerups right in the middle of a game as they need them.

So far, Moody says he’s having fun working with his father in the company.

“I try not to push him too hard,” Moody said. “He still gets me to do my chores.”