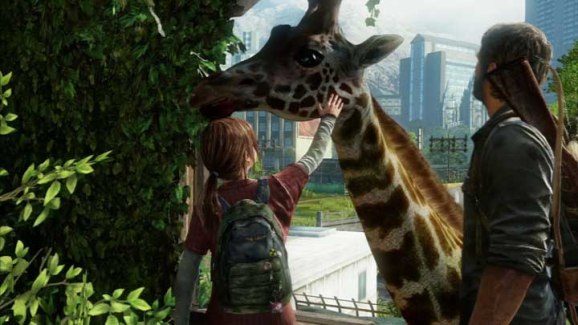 The GamesBeat staff is full of masochists. For the second year in a row, we’ve chosen a video game that ripped our hearts out and stomped on it repeatedly until we were just hollow shells of our former selves.

So why did the PlayStation 3 exclusive horror-shooter The Last of Us win our staff-voted overall Game of the Year, and not [insert favorite game here]? It has a lot to do with developer Naughty Dog’s masterful approach to storytelling. The studio did a complete 180 from its happy-go-lucky Uncharted series to create the depressing and morally ambiguous world of The Last of Us, where civilization falls prey to a highly contagious fungal infection that turns its victims into terrifying zombie-like creatures.

It’s here we meet Joel and Ellie, two stubborn characters (one a veteran killer, the other a teenage girl) who quickly learn that they need each other to survive. Combat is intense and brutal, with many 1-on-1 encounters ending with either crushed skulls or a swift stab to the neck with a shard of glass. And just when the game starts to feel a bit slow and mundane, Naughty Dog resets the rules with an amazing third act that doesn’t let up until the credits roll.

For its memorable cast, its unflinching exploration of the human condition, and for having one hell of an ending, The Last of Us is our Game of the Year. (You can find our other best-of-2013 picks here.)

Read up on our coverage on The Last of Us:

GamesBeat’s 2013 Game of the Year Runners-Up: