Quantum computing, which utilizes the ambiguous “quantum” states of matter rather than clear-cut 1s and 0s, has been a fertile area of research and speculation for years. But is it ready for real-world applications? D-Wave thinks so, and it’s building a business on commercializing quantum computing. It has even sold its computers to the likes of Lockheed Martin and, in 2013, to Google and NASA. D-Wave raised $30 million in October, 2012 from the CIA, Amazon founder Jeff Bezos, and other investors.

Above: Vineet Jain, the CEO of Egnyte.

Egnyte, an enterprise-oriented file-sharing startup, caught our attention earlier this year when we got to know cofounder and CEO Vineet Jain. He was clearly in the right place at the right time. With revelations about the extent of the NSA’s snooping on cloud-based networks, many companies are concerned about security. Egnyte has a promising solution: hybrid cloud storage that lets companies keep data on-premises or in the cloud, depending on how much security they need for each file. A $29.5 million funding round, with participation from CenturyLink and Seagate, positions Egnyte well for the coming year.

Firebase is a great example of a company that is trailblazing in the hot market of Backend as a Service (BaaS). In general, BaaS simplifies the lives of developers who don’t want to deal with complicated server, database, and messaging technology — and Firebase does that by providing a real-time database, on which gives applications access to data that can be updated (and transmitted to those apps) at high speed. One customer, Simtable, has used the tech to build an app that helps firefighters track and put out wildfires, and we featured it onstage at our inaugural DataBeat conference. Firebase was founded in 2011 and went through the Y Combinator incubator; it raised $5.6 million in funding from Union Square Ventures and FlyBridge Venture Capital.

Mass Relevance‘s platform interprets what people are saying about brands on social networks such as Facebook, Twitter, Vine, and Instagram. It presents that data via a manageable dashboard media companies can actually make sense of and use for both marketing and interacting with fans/customers. The Austin, Texas-based startup’s clients include The White House, ultra popular TV shows like HBO’s True Blood and NBC’s The Voice, and a variety of top brands.

Numecent‘s “cloudpaging” technology puts application code in the cloud — and delivers it to users almost instantly. You don’t need to understand how Numecent makes complex applications seem like they’re running natively. The important thing is that now software companies can sell on a regular subscription basis and provide fast access in browsers, without forcing users to go through the pain of installing the software. And implementing cloudpaging is said to take less than a day.

Redstone Technologies made us sit up and pay attention with its claims to have a new technology that can deliver gigabit Internet everywhere — wirelessly and with lower power consumption and far cheaper installation costs than is possible with cellular, Wi-Fi, or WiMax technologies. So far, the Tampa, Fla.-based startup is long on promise and short on actual proof. But there’s enormous potential here, and we’ll be watching Redstone closely in 2014.

RelateIQ is an ambitious startup, pitching “relationship intelligence” as a smarter tool for salespeople to stay on top of conversations with all their important contacts. In short, it’s taking on the entire category of customer relationship management (CRM), a market dominated by Salesforce.com and other behemoths. It’s got some serious data science talent on hand. DJ Patil, a co-creator of the now-hot term “data scientist,” joined the company after being data scientist in residence at Greylock Partners and previously head of data products at LinkedIn. The Palo Alto, Calif.-based company has raised $29 million to date.

RethinkDB, a modern, distributed database with a custom query language, hopes to show its database’s advantages over competitors. Developers have indicated they like the ease of use of Rethink’s query language, which is one hard part that popular NoSQL database MongoDB gets right but others have struggled with. Now RethinkDB must show that it’s also good at handling huge volumes of data. We think it has a shot at becoming a viable company and a standout in the increasingly crowded NoSQL field. 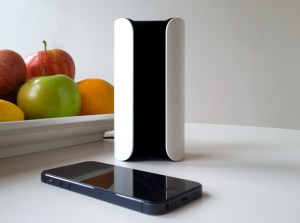 Above: Canary is about the size of a soda can.

Canary is a $200 device the size of a soda can that can keep your home secure using its HD camera and a variety of sensors to track motion, air quality, and sound, and to deliver updates to your smartphone whenever something happens. When it launched an Indiegogo campaign in August, it set out to raise $100,000. Instead, Canary pulled in close to $2 million, making it Indiegogo’s most successful campaign ever. Its “device + service” model is very much in vogue now, with companies such as Dropcam, Fitbit, and Jawbone seeing lots of success — among customers and investors — by combining a useful gadget with an ongoing service that makes it even more useful. When Canary sells a device, it’s also creating a relationship with customers that will last long after that product is shipped.

Scanadu raised $1.6 million in a record-breaking Indiegogo campaign for its Scanadu Scout “tricorder” — a $200 hockey puck-shaped gadget that can collect a vast amount of data on your medical vital signs with ease. Hold it to your temple and, in less than 10 seconds, it will collect data on your heart rate, respiratory rate, blood pressure, temperature, and even emotional stress level. A few months later, it raised $10.5 million in venture capital and started talking about a second device, the ScanaFlo, which is a portable urine analysis device that can detect pregnancy. Together, these two devices promise to turn your smartphone into a powerful medical tool — and that holds a lot of promise for anyone wanting to get a better handle on their health. “By getting precision diagnostics into the hands of people, this can enable them to get early detection and to inform their conversations with their doctor in the ways that haven’t been possible,” chief executive Walter De Brouwer told VentureBeat earlier this year. ScanaFlo will hit the market in 2014, the company promises.

Lemnos Labs is a startup incubator with a difference: It’s focused entirely on hardware startups. We’re bullish about this sector for two reasons: One, the rise of interest in do-it-yourself projects, aka the “maker movement,” is inspiring a new generation of hobbyists to become gadget-making entrepreneurs. Two, even big companies like General Electric and Apple are starting to move some of their manufacturing back to the U.S. Lemnos Labs is in a good position to capitalize on those trends. Highway1, another hardware accelerator (backed by offshore manufacturing facilitator PCH International), is also worth paying attention to.

Oculus VR makes a headset, the Oculus Rift, that just might fulfill the long-empty promise of truly immersive virtual reality. Starting as an independent project, the Oculus Rift attracted the attention of seasoned gaming execs Brendan Iribe and Jon Carmack, ran a wildly successful crowdfunding project, raising $2.4 million on Kickstarter, then pulled in a $16 million series A in mid-2013. After selling 40,000 of the headsets to developers, Oculus VR landed a massive $75 million round from Andreessen Horowitz  in December. Our interview with Brendan Iribe gives a sense of just how far this company has come — and where it’s going next.

Xiaomi is a Chinese phone maker that most of us hadn’t heard of until 2013. It’s undercutting already cheap Chinese phone makers by only making a few phones and crowdsourcing the design work. But what really put it front and center this year was when it raised a fourth round of funding that valued Xiaomi at $10 billion and, shortly thereafter, lured Android VP Hugo Barra away from Google. Clearly, Xiaomi knows something that we all can learn from.

“I always wanted to find a way to bring light into the cancers so surgeons could see what they’re doing while operating,” said pediatric neuro-oncologist Jim Olson. So he started a company to do just that. Tumor Paint is the first product from Olson’s Seattle-based company Blaze Bioscience, and it literally “lights up” cancer tissue, making it easier for surgeons to remove. The company has raised $19 million to date, including $9 million in December, 2013.

We called anti-aging startup Calico “the most interesting startup in Silicon Valley.” And we stand by that claim: It is backed by Google cofounder Larry Page, is being funded by Google, and will be led by former Genentech CEO Art Levinson. But more to the point, Calico is aiming at one of humanity’s oldest desires: prolonging life and improving our health and wellbeing as we age. We don’t know much yet about what Calico will do exactly, but it’s attracting a star-studded roster of scientists and biotech experts. We’ll be watching closely to see what this company can do in the coming years.

The health care “marketplace” is a joke — it’s a market in the same sense that putting on a blindfold and reaching into a sack full of random prizes is a market: You have no idea what you’re going to get until you pull it out. Castlight Health aims to fix that with a platform — sold to employers — that helps people evaluate where to get care based on cost and quality data. Castlight is well funded, with its most recent round, for $100 million, coming from Morgan Stanley, T. Rowe Price, Venrock, and others. An IPO seems quite likely for this company in 2014.