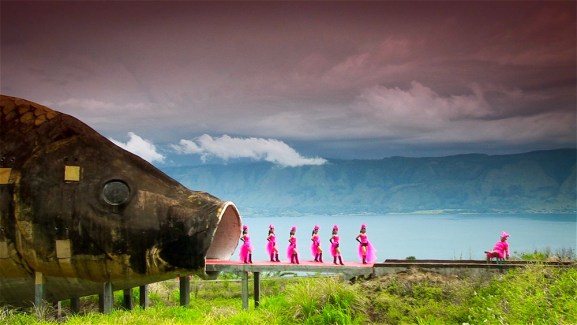 Image Credit: The Act of Killing

Anwar Congo is a mass murderer, a leader in the Indonesian government, and the subject of the latest BitTorrent Bundle release.

The Act of Killing is an Oscar-nominated documentary about the leaders of Indonesian death squads and their love of Hollywood gangster movies. It came out on iTunes today, and in conjunction BitTorrent released its last “Bundle” of 2013 to stimulate discussion and sharing around the film.

BitTorrent is a leading creator of file-sharing technology. The company launched a new file format in September 2013 called BitTorrent Bundles, which gives moviemakers, recording artists, authors, and any other content creator the ability to embed a mini-store inside their work.

For a deeper look, see: BitTorrent Bundles: a new file format that builds commerce and community right into content

BitTorrent was long hated by the entertainment industry because it enabled file-sharing, meaning consumers could access content without having to pay for it. BitTorrent Bundles changes that by turning sharing into currency. The content has money-making interactions baked into it, such as a $3 fee to access the rest of a music album, or requiring a user to post a link on Facebook to unlock a supplemental video.

It’s a media format designed for the Internet, and author Tim Ferriss described it as “one of the biggest innovations in media distribution of our generation.”

The Bundle for The Act of Killing includes a VICE video from Werner Herzog and Errol Morris, an interview with the film’s creator, Joshua Oppenheimer, essays, photographs, and the documentary’s trailer.

“The Act of Killing has an important message. Our goal is to reach as many people as possible — to preserve this film as a documentary, and as a testament to what happened in Indonesia,” said Evan Husney, creative director of Drafthouse Films, which helped distribute the content. “BitTorrent Bundle allows us to address a global audience of more than 170 million: to ensure that awareness of the film’s message reaches beyond the Internet’s censors and firewalls.”

The Bundle encourages people to promote the documentary, raising awareness and diving deeper into the issue. BitTorrent also said that by using decentralized technology, it protects “digital artifacts” from being destroyed or censored.

There are already hundreds of Bundles available through the “alpha program.” Madonna, Tim Ferriss, Lady Gaga, Mickey Hart, Linkin Park, and others have all created BitTorrent Bundles because the Bundles break down some of the barriers that exist between their work and their fans.

Right now, content like music and movies exists behind a pay wall (if the goal is to make money, that is). Once published on iTunes or Amazon, it quickly becomes available on pirated sites, where people can access it for free. This has been the bane of the music, television, and movie industries.

BitTorrent Bundles embrace the sharing-nature of the Internet, and present a new way for creators to encourage sharing while still making money. Bundles also represent an effort on BitTorrent’s part to shed its image as a vehicle for piracy and an enemy of artists.