Dave Roberts, chief executive of Electronic Arts’ PopCap Games division, is retiring from the game studio that he joined almost nine years ago. Cofounder John Vechey will take over the job of running the Seattle-based studio that created hits like Plants vs. Zombies and Bejeweled.

EA, which is one of the largest video game publishers, has been trying to get its mojo back by focusing on big new games for the digital era. EA bought PopCap for $750 million-plus in 2011 under the stewardship of previous chief executive John Riccitiello. With the appointment of new CEO Andrew Wilson in September, the management structure of EA and its various studios has been in flux.

The news will be effective Wednesday, Jan. 8, GamesBeat has learned.

This makes Vechey the last remaining cofounder, as Jason Kapalka will leave PopCap at the same time that Roberts does. Kapalka will remain a creative consultant for PopCap. 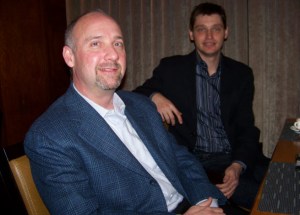 Above: Dave Roberts [foreground], the outgoing head of PopCap Games, and co-founder John Vechey in 2008.

Vechey, 35, is taking over the leadership at a time when PopCap steps down on the publishing side and goes back to being its own development studio, supplying games that EA’s larger organization will publish. The shift suggests that creativity is a bigger priority for PopCap now than dealing with business matters. The change is consistent with EA’s appointment of Wilson, a studio creative leader, as its top boss.

Vechey has a lot of work to do in coming up with more megahits that will set PopCap apart from the growing crowd of competitors in casual, social, and mobile gaming.

“We need to get back to the place where we used to be and not just in mobile,” Vechey said in an exclusive interview with GamesBeat.

“PopCap’s mission right now is to create the greatest mobile game studio in the world, and we’re going to do that by only making games that are beloved by players. We’re focusing on our foundation in 2014 – talent, process, and most importantly, great products, around that mission.”

PopCap has had stable leadership for a long time. It was founded in 2000 by Vechey, Brian Fiete (who left some time ago), and Kapalka. It had about 400 people before the acquisition but has thinned out under EA, partly by closing a studio in Dublin with 96 employees.

Roberts joined PopCap in 2005 and helped expand it into a much larger company. He provided a lot of its adult supervision, and in 2010, it reported revenues in excess of $100 million. But like other established game makers, PopCap has had a hard time adjusting to the new free-to-play business model, where players can play for free and pay real money for virtual goods.

That challenge continues to this day, as Plants vs. Zombies 2 scored huge numbers of downloads but hasn’t monetized as well as EA had hoped. Vechey wants to instill thinking about monetization in the early stages of game design so that it can be a natural and fun part of play. He doesn’t want to make “premium games with a little monetization on the side.”

PopCap has had a remarkable string of hits over the years, starting with Bejeweled, the match-3 gem-swapper that revived puzzle games. That title, which pioneered the play-before-you-pay business model for web games, has sold well over 50 million copies, and it has been played for many billions of hours. It went on to create a whole category of casual, cartoon-style games including Bookworm, Peggle, Zuma, and Plants vs. Zombies.

The studio didn’t produce much in 2012, leading critics to wonder why EA paid so much for it. PopCap seemed to suffer from taking too long to get its new original games, out on a timely schedule.

In 2013, the company was more active, shipping Plants vs Zombies 2 in the summer. It also announced the first-person-shooter multiplayer title, Plants vs. Zombies: Garden Warfare, which will debut early in 2014. That game will blend the zany antics of animated vegetation battling undead with the 3D graphics capability of EA’s Frostbite 3 engine.

Vechey had a casual and carefree personality at PopCap under the direction of Roberts. He was prone to saying things like “stupid venture capitalists” and “don’t be stupid” regarding his advice on running a game studio. When he introduced Peggle 2 at the most recent E3 video game tradeshow, Vechey jumped in the air and came down with a big fist slam. He’s passionate about working on quirky, fun games; he showed his enthusiasm for Plants vs. Zombies by wearing a giant zombie mask on his head on the E3 stage.

Roberts raised $22 million in venture money to take PopCap to a new level before it sold itself to EA. It’s not clear what Roberts will do next, beyond retirement.

“We wish Dave all the best,” Vechey said. “When Dave joined PopCap, we needed a business leader to help us bring structure to our creative chaos and set us on a sustainable path. He has made a huge mark on PopCap, and we thank deeply him for it as he embraces his new adventure — which will probably consist of doing very little for a while! I continue to be the most passionate believer in PopCap, and I’m excited and honored about taking over as PopCap GM.”

Vechey is sticking around to try to get PopCap to focus on what it does best: creating brand-new games that take people back to the “glory” days of gaming, with simple and accessible mechanics.

“We have underinvested in new IP,” he said. “Getting more new IP out per year is the goal. We want to formalize the creative process and get it to scale better.” 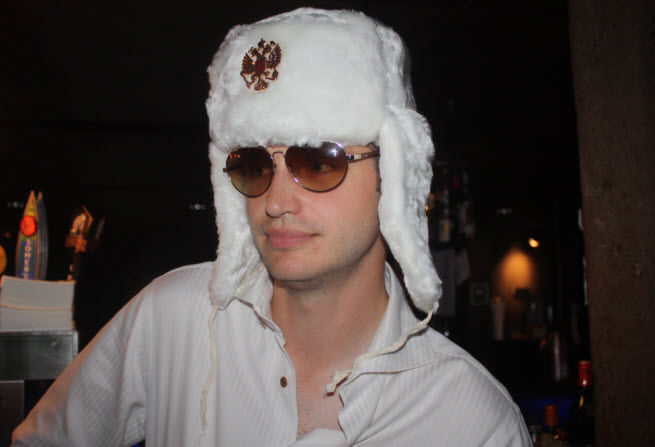 Above: John Vechey of PopCap Games at a party in 2012.