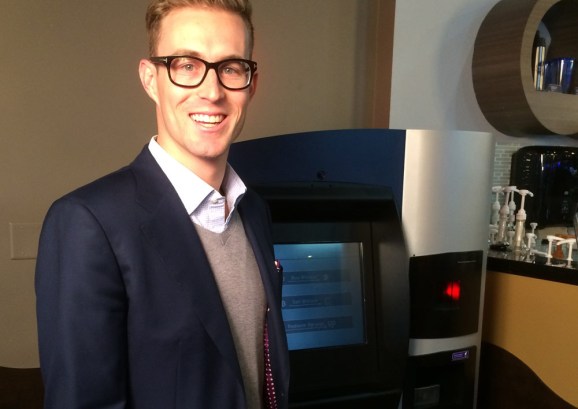 Bitcoin ATMs are headed to Asia, and beyond.

Robocoin, the maker of Bitcoin ATMs, is shipping its first two units to “Bitcoin-hungry” markets in Taiwan and Hong Kong. It expects to ship eight units that dispense this hot “cryptocurrency” this month and 39 by March.

“The ensuing liquidity injection from these machines should provide substantial impact on Bitcoin’s valuation, not seen since the buying frenzy in November,” the company said in a statement.

Robocoin is a machine where you can buy, sell, and trade Bitcoin. It is integrated with Bitcoin exchanges Mt. Gox and Bitstamp, and people can either deposit cash or checks in exchange for Bitcoin or cash out Bitcoins they already own.

CEO Jordan Kelly told VentureBeat that Robocoin’s goal is to bring Bitcoin to the masses and make it “grandma-friendly.” The first machine opened for business in October in a coffee shop in Vancouver, Canada.

The kiosks cost a steep $20,000, and after the Vancouver debut, dozens more were quickly ordered for locations around the world. They come tricked out with security measures such as a hand scanner, government ID scanner, and human-verified facial-matching to prevent fraud. The ATMs are also compliant with local financial regulations.

Bitcoin remained on the fringes of the Internet for years — interesting mainly to techies and people using it for unsavory purposes, like anonymously buying or selling drugs.

Then it took off.

Bitcoin experienced a meteoric rise in 2013  — soaring from $10 in January 2013 to a peak of $1,200 — largely driven by strong demand in China. It also began attracting mainstream attention.

However the currency is still volatile and has plenty of skeptics. The New York Times columnist and Nobel Prize-winning economist Paul Krugman called it “evil,” and VentureBeat editor-in-chief Dylan Tweney said, “It’ll be like a pet rock or a share in Sears: Cool and fun this season; worthless and quaint in years to come.”

Kelley said that in order to give Bitcoin stability, legitimacy, and lasting power as a currency, people need to use it on a regular basis, which Robocoin encourages.

“It’s going to be a daily use machine,” Kelly said. “This is really going to add liquidity to the market … providing that instantaneous access which has never happened before.”

The company will ship to Asia first, with plans to ship to other Canadian locations, Europe, and the U.S. in the next few months.