Basis Science is making a few announcements for its fitness tracking watch today, including a new Carbon Steel Edition, a coming retail debut at Best Buy stores, and a preview of its advanced sleep analytics that will tell you the quality of your sleep. 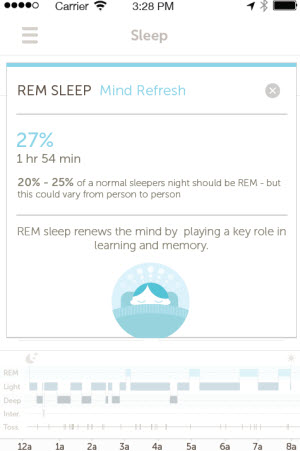 Above: Basis can track your REM sleep.

The announcements are just in time for International CES, the huge tech trade show next week in Las Vegas, and they show that Basis Science is starting to figure out its audience. It has a loyal following of geeks who don’t mind paying extra for a multi-sensor fitness tracking watch. And it has figured out that those geeks aren’t getting enough sleep.

The new analytics will tell you when you were in a light sleep, rapid-eye movement (REM) sleep, or deep sleep, Jef Holove, chief executive of the San Francisco-based company, told VentureBeat. They will also tell you your sleep quality in terms of toss-and-turns, interruptions, and duration. These features are possible because the company built a variety of sensors, such as a sweat sensor and heartbeat sensor, into its base platform from the start.

“We have noticed that sleep is a very high-interest item among our users,” Holove said. “We are making better use of our data now. We have no change to the hardware, but a massive change to our software algorithm. And we will deliver better context for your sleep information.”

The original Basis Band came with swapable wrist bands, and the Carbon Steel version was the most popular $50 option. So the company will now sell that as the default version at $200 and discount its existing Basis B1 Band to $179 while inventories last. The Carbon Steel Edition is available on the company’s web site now. It will be on Amazon soon and will be available on Feb. 2 at Best Buy Stores. The Advanced Sleep Analysis feature will be available on Jan. 21 with the release of the Basis app 2.0 version for iOS, Android, and the Web.

“Best Buy is important because 80 percent of consumer devices are still bought in stores,” Holove said.

Basis competes with lots of rivals, from the Nike Fuel Band to the Jawbone Up. At $200, the Basis Band is more expensive than its rivals. but Holove believes his company is showing the unique advantages that come with having multiple sensors, including the heartbeat sensor that is key to measuring how intense your workouts are and the exact hours when you are sleeping. 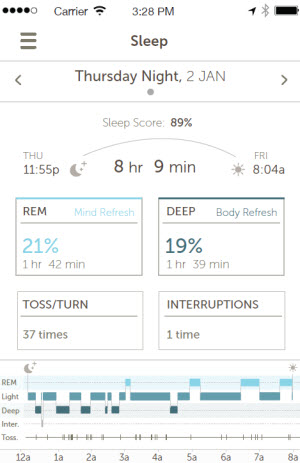 In November, Basis revealed its Body IQ feature, which showed how it could sense whether you were running, walking, or biking. It provided new cloud-based analytics that help you track those activities. Besides measuring sleep phases, Basis will give you sleep analysis with daily and average sleep scores, so you can track your progress over time. That information will be visible in your web and mobile dashboards.

“No other tracker is able to provide this level of insight,” Holove said.

The Basis Science team partnered with researchers at the University of California, San Francisco (UCSF), San Francisco Veterans Affairs Medical Center (SFVAMC), and the Northern California Institute of Research and Education (NCIRE) in the testing and validation of Advanced Sleep Analysis. The Sleep Foundation says that 74 percent of Americans have sleep problems, and 40 percent don’t get the recommended seven hours of sleep a night.

Part of the reason is that people are working more at home and using that time to do work at odd hours. A third of Americans say they’re drowsy during the day.

Measuring the type of sleep cycle is important because you’ll definitely feel it if you wake up too early. The measurements will train you to know how much of each type of sleep phase you need over time.

Basis will give you a “personal sleep score” that measures overall sleep quality. It will track healthy habits like whether you have a consistent bed time or waking time. You don’t need to push buttons or change modes, as Basis will automatically capture your sleep habits.

The Carbon Steel Edition includes hundreds of small improvements made over the past year based on user feedback and testing. The device is more waterproof than it was at first, it has polished chrome, has an improved display, is stretchable, and has silicon black straps that allow for better flexibility and breathability, Holove said. 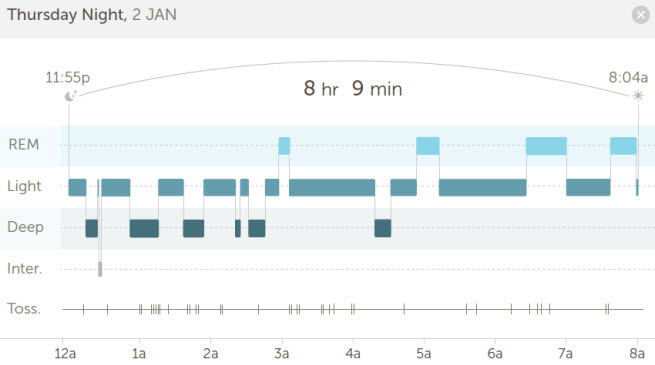 Above: The analytics deliver data on the quality of your sleep.