Avegant‘s Glyph is a virtual retinal display that gives you the experience of watching an 80-inch TV. Except there is no TV, as the Glyph uses optics to shine moving images directly on your eyeballs.

The Glyph is the latest in a whole string of innovative human-machine interfaces — from virtual reality goggles to eye-tracking — that promise to turn traditional gaming upside down.

“You’ll be able to sit in an airline seat and get an 80-inch TV experience,” said Yobie Benjamin, the chief operating officer of Avegant, in an interview with GamesBeat.

Ann Arbor, Mich.-based Avegant is showing its head-mounted Glyph at the 2014 International CES, the big tech trade show this week in Las Vegas. I saw a demo last week in the Bay Area. The display is embedded in two optical assemblies that are housed in the band, which goes across your eyes and face like a very thick pair of sunglasses. You hold it in place by attaching it to your ears. 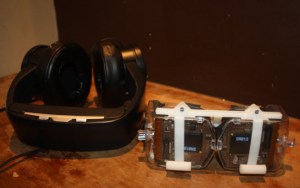 Above: Avegant’s newest prototype is on the left, the older one on the right.

Avegant isn’t kidding when it says it can make you feel like you’re playing in front of a big screen TV. As long as the optics stay in front of your eyeballs, they can shine a 720p video image in front of your eyes. The device is attached to high-quality, noise-cancelling audio headphones, which make the experience more immersive. The image quality is vivid, with brilliant colors, not a washed-out image like you sometimes see with small displays.

Avegant works with existing games, as you see a game with a rectangular border around its edges. It is akin to using an old nickelodeon viewer. You put your eyes up against the binocular-like lenses and then you see a movie playing there. It has borders around its edges. It’s not 360 degrees like a virtual reality world.

It has a 40-degree field of view. By contrast, the Oculus VR’s virtual reality goggles, the Oculus Rift, require software developers to make brand new games that take advantage of the 360-degree virtual imagery.

Avegant could create its own unique technology that game developers could take advantage of, but that will likely come later. Evans said that, as a startup, it’s too hard to get game publishers to create custom content for a brand new device.

“Building an ecosystem is way too hard,” he said. “We want to put in hooks for the developers, like head-tracking. There will be an opportunity for them.” 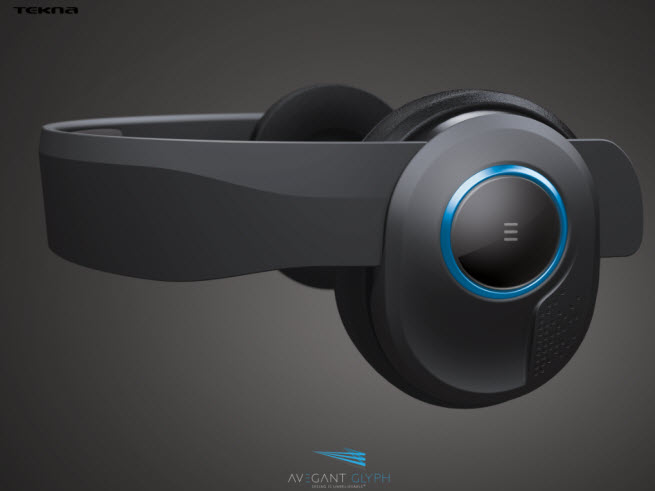 Above: With the Glyph, the band covers your eyes and shows you video imagery.

I used it to race a car around a track in Real Racing 3, a mobile game. And Evans also showed me a version of Call of Duty running on the Glyph.

Evans said his team will deal with known problems later. Once they have a final design, they’ll address human-factor problems like making sure that the device stays snug on your face. For me, it dipped a little based on the weight of the display, and so I had to hold it in place with my hands. Evans said a final version will be more snug and will have an option for strapping the device across your head so that it stays in place.

“We haven’t worked out the human factors yet, but we want it usable by everybody,” he said.

With an embedded battery, the device will have a three-hour battery life.

Evans said that the company will launch a Kickstarter campaign on Jan. 22 so that it can engage with consumers and get lots of feedback on exactly what they want. At that point, consumers can place orders for the $499 devices and receive them later in the year.

The heart of the Glyph is an optical engine called a virtual retinal display. Using a low-powered light-emitting diode (LED), a series of custom optics, and a micromirror array, the visuals produced by the headset are crisper and brighter than those from conventional display technologies, Evans said. The mirrors allow Glyph to project particular images onto your eyes. The device is very fast as the latency is under 12 milliseconds. It can accommodate video at 120 frames per second in each eye. There is no pixelation.

“We send light into your eye that mimics natural vision,” Evans said. “We condition it and reflect it. You can watch something on it for a long time.”

You feed the game or other images into the Glyph via an HDMI or MHL cable so that you can get images from game consoles, PCs, smartphones, tablets, and other compatible devices.

For games, you use a traditional controller. That’s a bit tricky as you have to glance down at your hands to see your finger positions, and that creates the risk of having the optics move away from your eyeballs. Besides playing games, you can also watch movies, control a desktop environment, or perform other computer tasks.

Among the advocates for the system is Philip Rosedale, the creator of Second Life. “Avegant has made some great progress improving core technology that will make generalized virtual worlds possible.”

Avegant was founded in 2012, based on years of research and patented technology developed by Evans. It has eight people and has raised $2 million in angel and institutional funding so far. Among the investors is DN Capital.

At CES, Avegant will show off the Glyph at the NBCUniversal cable network Syfy’s CES 2014 event “Who Will Take Your Brand Into the Future?”, part of VivaKi/Publicis Groupe’s “Bright Lights, Big Ideas” CES initiative. The device will also be on display in Texas Instruments’ booth since it uses TI’s digital micromirror technology along with proprietary optics. 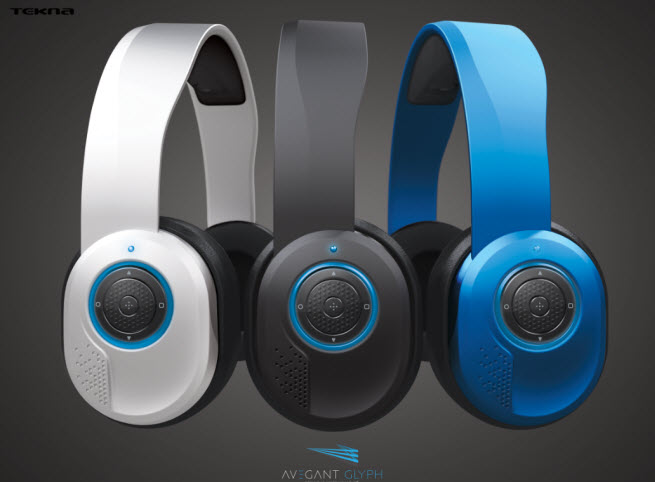 Above: Avegant Glyph in three colors.