LAS VEGAS — I am second in line for the MakerBot press conference at CES.

For those of you unfamiliar with the territory, there are three things you do on Press Day at CES: kvetch incessantly with your “competitors” in the press room (4-5 hours); attend press conferences (2-3 hours); and wait in lines (5-6 hours).

The lines wind around like you’re fixin’ to get on the Pirates of the Caribbean ride at Disneyland. They start up two hours or longer before the press conference begins. The more popular the product lineup, the longer the line.

So being second in line for MakerBot is kind of a big deal. I do this for you, my people, because I love you. And I’m really excited about MakerBot.

It’s probably because my love for MakerBot goes way back, man. I remember when the first MakerBots were little $5,000 hunks of novelty. I thought they were hella cool back then, and MakerBot founder Bre Pettis has promised me that what I’ll see today will blow my little mind.

First, you’ve got the Replicator Mini, an easy-to-use, compact 3D printer for all skill levels, priced at $1,375 and ready for production now. “This is our consumer 3D printer,” said Pettis. “It’s one-touch printing. You connect it to your smartphone or computer, and then there’s just one button. You’re ready to go. If this were a camera, it’d be the point-and-shoot.”

And speaking of cameras, the Mini has a smart camera included for monitoring print progress and sharing your freshly printed stuff. It’s also got a smart extruder to pause printing and notify you when you need more filament.

Second, Pettis unveils (literally, he takes a black box off the unit) the new MakerBot Replicator, the fifth generation intended for desktop use by the professionals in aeronautics and architecture and engineering. It’s got a larger build volume than the MakerBot 2, and it’ll put out 100-micron layer resolution. There’s a 3-inch LCD display with a hi-fi-like knob controller, an ethernet connection for heavy-duty jobs, an extruder, and an onboard camera. “We’ve never made it easier to 3D print,” said Pettis.

The third and final revelation coaxed audible and prolonged groaning noises out of the audience of total nerds. “This is epic,” said Pettis. “Epic. Like. Augh!”

This huge unit is the MakerBot Replicator Z18. It can print up to 12 x 12 x 18 inches — that’s 2,592 cubic inches. “This is industrial-strength 3D printing. This has been our dream for a long time,” Pettis said.

The Z18 has the same high-res options, the same powerful connectivity, the same onboard camera. Additionally, it has a heated build chamber. And you can print a space fighter helmet with it. 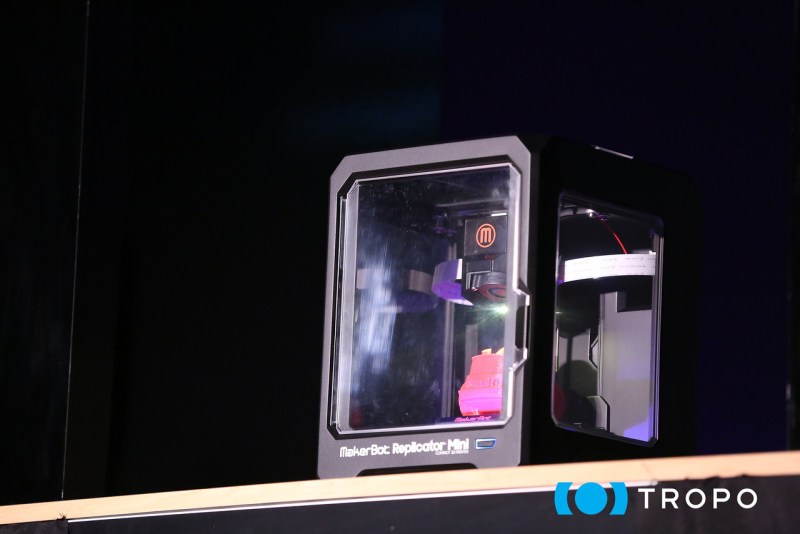 There’s also a new cloud-connected MakerBot desktop app for using MakerWare and exploring the design library. Naturally, there’s also a MakerBot mobile app for monitoring and controlling your MakerBot, for getting notifications about your print jobs, and staying plugged into the world of MakerBot resources.

The final app is the MakerBot Printshop, a simplified object design program.

And if you’re too new or young or whatever to do the design yourself, you can buy designs from the MakerBot digital store. MakerBot is kicking it off with six design collections — fun models and toys in various themes, all very kid-friendly and starting around 99 cents per design.

Throughout all this demo-preso song and dance, Pettis is overflowing with enthusiasm, just fit to bust over telling us this news. It’s hard to impossible not to get caught up in the moment with him.

“We’re here to make it so you can change the world, to unleash your creativity,” Pettis concluded.

“These things all connect to each other. We’ve created a MakerBot experience that’s easy, friendly, and affordable so you can make the future happen, you don’t have to wait for it to happen.”

Now, let’s do some stats. More than 44,000 MakerBot units have been shipped to date, and the MakerBot “thingiverse” contains 218,000 designs. Around 48 million designs have been downloaded.

Today, MakerBot is also announcing a partnership with Softkinetic to make a new generation of 3D printers. The company can’t reveal too much around that.

However, Pettis also said he is launching an initiative to put a MakerBot unit in every school in the U.S. So far, 106,260 students have access to a MakerBot. You can find out more about funding this project at DonorsChoose.org.

We’ll have lots more coming from the show, so stay tuned to our CES hub for more news, gadgets, and interviews.