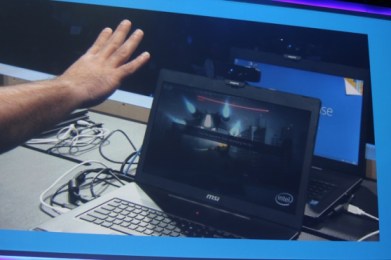 Above: An Intel gesture game that uses the RealSense 3D camera.

Intel showed the demos at a press event at the huge 2014 International CES, one of the world’s largest tech trade events. The demos were part of Intel’s initiative to create perceptual computing, or new ways to control the computer using natural interfaces such as touch, gestures, machine vision, and other modern tools.

“We bring together the real world with the virtual world,” said Mooly Eden, the senior vice president of perceptual computing at Intel. “We will make it more human-like. We have seen this in science fiction movies and books. We will finally remove the fiction from the science.”

Shunsuke Nakamura, a user interface designer and CEO of Shikumi Design, showed a music app that he created based on the RealSense camera. He moved his hands around to make musical sounds and mixed them into a kind of electronic concert in real time.

Video blogger and TV personality iJustine showed how you could do a Microsoft Skype call with the camera and quickly cut your image out and transpose a new background, such as the beach in Hawaii.

Intel showed entertainment apps like Clifford the Big Red Dog, which you use to interact with a book and its characters. You can play with characters using your hands and pretend to swim in an underwater coral reef. With a kind of augmented reality, you can then see yourself swimming in an animated world on the computer screen.

Intel also showed a gesture-controlled game called Hoplites, where you use your fingers to help animated soldiers jump over a gap from one cliff to another.

The immediate reaction to the entertainment apps from analysts was mixed.

“It’s a little rough around the edges,” said Richard Shim, an analyst at NPD DisplaySearch.

“I think it shows a direction more than finished product,” said Nathan Brookwood, an analyst at Insight 64, a market analyst firm. “I was a little disappointed because a lot of things Intel showed are things Qualcomm has been showing for years.”

He added, “It was unusual as a presentation for intel because they talked so little about technology. I’m not sure this is the future of the PC.” 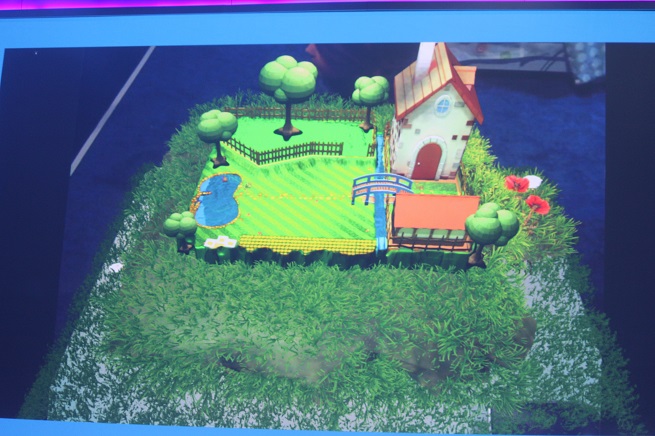