Intel wants to make the PC more friendly to humans, and it’s making progress on that.

Eden announced the Intel RealSense 3D camera as one of the first products in a family aimed at making the PC as natural to use as computing smartphones and tablets. Intel says the camera integrates 3D depth sensing with a traditional 2D webcam module.

The company made the announcements at the 2014 International CES, the huge tech trade show in Las Vegas this week.

“We’re moving more toward convenience as opposed to raw performance in the computing industry,” said Richard Shim, an analyst at NPD DisplaySearch. “The question is how OEMs (original equipment makers) and consumers support it. It is about making the computing experience more intuitive.”

But a lot will depend on the execution, Shim said.

iJustine, a video blogger and TV personality, showed how you could change the background of your Skype call just by selecting a new background.

The camera can tell what your mood is by the expression on your face.

The camera is a full HD color 1080p video camera. It can detect finger movements, facial expressions, and recognize gestures. The Intel RealSense 3D camera will be integrated into products like a 2-in-1 laptop-tablet hybrid, laptops, and all-in-one desktops. The camera will be coming in the second half of the year from computer makers including Acer, Asus, Dell, Fujitsu, HP, Lenovo, and NEC.

The 3D camera will be able to do tasks such as video conferencing, enhanced learning, augmented reality, immersive gaming, and image capture. 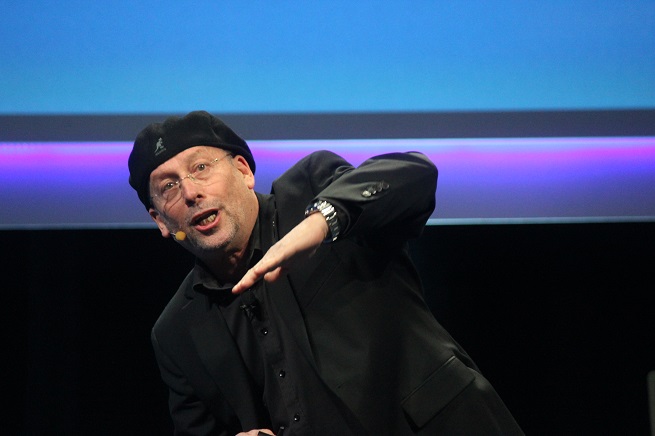 Above: Mooly Eden of Intel