Intel chief executive Brian Krzanich described his vision for wearable computing — including a number of devices designed by the world’s biggest chip maker itself — in his first major international event speech. 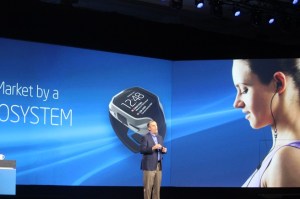 Krzanich made the announcements during his opening keynote speech in the vast Palazzo Ballroom at the Venetian Hotel in Las Vegas, where the huge 2014 International CES tech trade show is underway. He began the speech with wearables.

He said wearables have to solve problems that you have at a given moment, and you can do that by making “everything smart.” Intel is making its new Quark microprocessor, which is targeted at low-cost, low-power “Internet of things” applications. This kind of chip will make it into wearables.

“Is there anywhere else to show off something new than opening night at CES?” Krzanich asked. 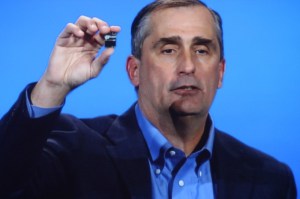 It’s not clear if Intel will bring some of this technology to market itself. Krzanich said Intel is working with partners to make it all come to fruition.

The earbuds charge themselves by plugging into the microphone jack of your smartphone.

Intel called the personal assistant “Jarvis,” and it worked with a speech-driven Siri-like virtual assistant.

The smart charging bowl will let you charge a variety of devices in a bowl, without actually plugging them into a jack.

He also showed off a smartwatch with a geo-fencing app, which shows you where your child is at any time. It is smart and it shows if the kid is on track to get to school on time. If the child isn’t on schedule, it sends a notification to the parent.

He also showed off Intel Edison, a new Intel Quark-based computer housed in an SD card. It will be available in the middle of 2014. It has as much computing power at Intel’s old Pentium microprocessors.

Krzanich showed how Edison could be built into a baby’s onesy. It detects if the temperature of the baby’s onesy gets too hot. You can get your notifications on your coffee cup, which has a green indicator or a red indicator to tell you if you need to do something for your baby.

“With Edison, the opportunities are endless,” Krzanich said.

He called on the world to innovate with the Intel “make it wearable” challenge. Intel isn’t going to make everything itself, so it wants the rest of us to create Edison-based ideas. The grand prize is $500,000, and it will have $1.3 million in prizes altogether.

Krzanich said that the need to protect mobile devices in this environment of wearables is paramount.So Intel will make its McAfee security protection available on mobile apps for free. 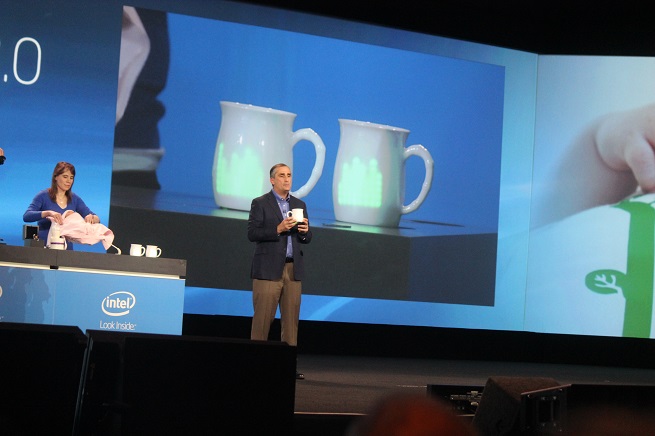