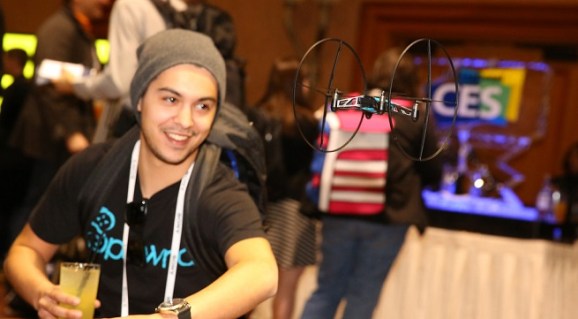 LAS VEGAS — Parrot, the French maker of entertaining gadgets like the AR Drone, has revealed two new amusing drones that you can control with an iPhone or iPad.

Henri Seydoux, the CEO of Paris-based Parrot, showed me how the new Mini Drone (above) and the Jumping Sumo work in a demo at the start of the 2014 International CES, one of the biggest tech tradeshows in the world.

The Mini Drone works on a Bluetooth network and can travel a short distance. It can roll on the ground on its big wheels or take to the air with the help of four quad rotors. It can hover and fly like a helicopter.

The Jumping Sumo, meanwhile, has two big wheels connected by a bar, like a dumbbell, but one with a tail attached. The Jumping Sumo can jump up in the air (this could scare somebody who isn’t paying attention). It connects to Wi-Fi and can travel as far as that network extends.

The Jumping Sumo is designed to look like half robot, half insect. Both will debut sometime this year.

The price isn’t set yet.