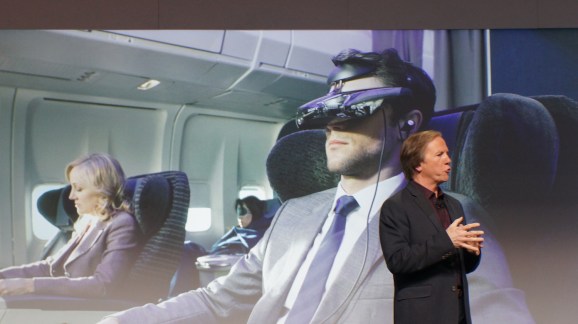 The HMZ-T3Q has a virtual screen that reaches up to 750 inches. And, yes, it looks exactly like a virtual reality helmet. It sits on top of your head like a coal-miner’s headlamp and covers your eyes, cocooning you in your own private cinematic-world.

“The head-mounted display is a theater on your head,” said Michael Fasulo, Sony Electronic’s president and chief operating officer, during his keynote at the 2014 International CES trade show in Las Vegas today.

The headset is always aware your own movements as well — a plus for gaming. It knows when and where you turn your head and allows you to then focus in on that scene.

Sony’s headset is completely portable, according to Fasulo, and is a good swap for spaces where a large television just doesn’t make sense. During the presentation, Sony showed pictures of a man wearing the headset on an airplane.

The company is competing with the Oculus Rift, a virtual reality headset that focuses primarily on gaming. The Rift also promises a 3D-playing experience and the same head-tracking with what it promises to be low latency. The Rift also has a screen that reaches a “110 degree field of view.”

The company seemingly introduced a lot of competing products today including its own GoPro-like action camera and a tennis racket-sensor reminiscent of Zepp Labs’.