The studio is creating one of the prettiest next-gen games to come out so far. Parent company Square Enix hopes Tomb Raider: Definitive Edition — coming out Jan. 28 on Xbox One and PlayStation 4 for $60 — will do more to re-energize what was a sagging multibillion-dollar entertainment franchise.

The new edition will be a fair test as to whether better 3D graphics alone are enough to get gamers to pay money again for a title that has already garnered tens of millions of their dollars. When the rebooted adventure Tomb Raider came out in March 2013, it was the fastest-selling entry in the history of the series, which has sold 40 million units and inspired three Angelina Jolie movies.

The upgraded graphics are even better than the PC version of last year’s release, as that was the base from which the developers began their new work. You can now see the dirt on protagonist Lara Croft’s face more clearly, the details of the terrain hiding in the shadows, and the spectacular flames of burning buildings. When you stare off into the horizon, you can see a lot farther into the sunsets and clouds.

“We’re adding more details that help with visual storytelling,” said Scot Amos, executive producer, in an interview with GamesBeat. “You get a feeling for a richer and bigger story than we told before.”

Square Enix pulled in some core members of Crystal Dynamics, the maker of the original title, for this project. The publisher also added development teams from Nixxes Software (Legacy of Kain: Soul Reaver) in the Netherlands and United Front Games (Sleeping Dogs) in Canada. The three studios worked for a year to build the Definitive Edition. 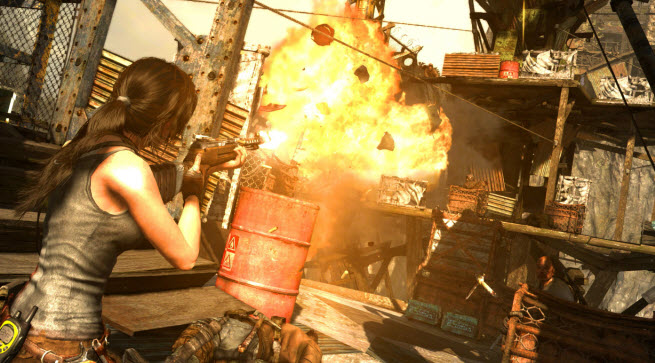 Above: Explosions and fire will look better in Tomb Raider: Definitive Edition.

During a hands-on preview of the game, I experienced many moments where I wanted to stop and stare. In the forest of the first level, I noticed a lot more bugs flying around, adding to the realism of the ambient environment. The little white insects helped make the environment seem alive.

Lara looks even more realistic than she did in the PC version of last year’s game. The devs completely rebuilt her head and face. Her eyes, for instance, move in a more believable way. They reflect light more than they used to. The graphical effects include sub-surface scattering, where light penetrates Lara’s skin, bounces around, and gives it a faint glow.

“Lara’s our star,” Amos said. “She has all new skin, outfits, and shading. When Lara moves, her necklace moves. The shapes, the expressions, and the eyes are all new.”

Now, the consoles can fully deliver on the Tress FX technology, which appeared previously only on the PC version of the initial release and gave Lara realistic hair simulation and motion. Every strand on her head is physically active, so it blows in the wind or flies when she’s running. The upgraded physics cause Lara’s bow to bend in a more realistic way as well.

“We’re beyond the PC version,” Amos said. “We took Tress FX, rewrote it, optimized it, and made it run on the consoles.”

The island of Yamatai also looks different. It has a dynamic wind that blows through the island and creates a swaying of the trees and bushes.

The reworked shaders and lighting show Lara’s journey through sweat, mud, and blood. The island’s trees look better. The foliage moves when Lara walks through it, and the bigger plants will impede her progress. Everything has more detail, including the cloth and weather. Textures have four times the resolution of the older console versions. The Definitive Edition features 10 to 15 times more particles than its console predecessor. The mountain stream is see-through and presents a distorted view of the rocks below.

“Once we redid Lara, we had to redo Yamatai too,” Amos said. “It’s a cool, visceral world. Last time it was a game world. This time it’s a real space. It’s like going from VHS to Blu-ray.”

Square Enix is taking a risk by investing the resources of so many studios and developers into a remake of a recent game that millions of people have already played. The title is exactly the same as it was before, only with prettier graphics. Square Enix is also including all of the downloadable content (DLC) in the new edition, as well as the digital versions of the Dark Horse comic, Brady Games’ mini-art book, and the Final Hours developer videos. The updated package has all-new weapons and extra outfits for Lara, too.

While last year’s game drew critical praise, Square Enix isn’t fixing the parts that the critics complained about. I found the initial part of Tomb Raider mesmerizing, as 20-year-old Lara falls victim to a shipwreck and is then held captive by a horrifying cannibal. She is vulnerable, wounded, and unsure what to do. While mysterious killers hunt her down, she learns to survive. And fight back.

She explores the island and uncovers plots and new enemies. And then, she slaughters her foes by the hundreds. She becomes a merciless killer. In fact, she becomes so good at killing that she’s unrecognizable from the beginning.

The problem with the game wasn’t the graphics. It was this unbelievable transformation and the game’s degradation from a good coming-of-age story into an insane shooting fest.

Above: In the new edition, sparks and flames will look better.

“For us, it’s the story we wanted to tell,” Amos said. “It’s the origin story. We had to move her from this person who is desperate to survive to this battle-hardened survivor to what she ultimately becomes, that worldwide adventurer. We didn’t break that. We were content with that as a studio. When it comes to rewriting the story, we’ve seen some other studios go that route, and that is not us.”

In other words, this remake is all about making the game work for the next generation.

I completed the first version last year, and I played multiple levels this time. In a level with rain, Lara’s skin gets wet and glistens. Her clothes get wet. Fires emit sparks into the air. When you look through falling water, it distorts your view. When lightning strikes, you see a shadowy environment light up.

On the seashore, the waves now look more lifelike. You see more white crests on the waves. The water has more luminosity and translucency. The peaks and valleys of the waves are more visible and less robotic. The sea is choppier, Amos said. Since the game has a new particle system, the developers threw in a couple of thousand seagulls into the scene for added realism.

“It creates a passion moment,” Amos said. “It’s a little bit showing off, but we want people to have fun. You stop and go, ‘Look at that!'”

The scenes where Lara runs through a burning building are spectacular. The smoke and fire feel real, and the danger from them is visceral.

When you look at the scene as a whole, it looks like somebody just peeled off a gray tape covering your eyes. The colors really come to life now. Or, in my case, it looks like I took my dirty glasses, wiped the film off them, and then saw the world with much more color again.

The gameplay is the same, but I would definitely recommend you pick it up. The experience should look the same on the Xbox One and the PS4. The PS4 version is different in that the controller lights up when you’re in an action scene.

For those who didn’t try 2013’s release, Tomb Raider: Definitive Edition is much more of a must-play than it was last year. Hopefully, that’s a large market that will pump up the sales and inspire other companies to continue making big investments in graphics. 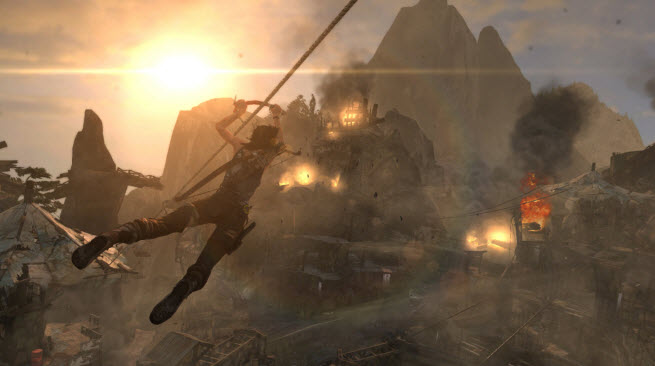