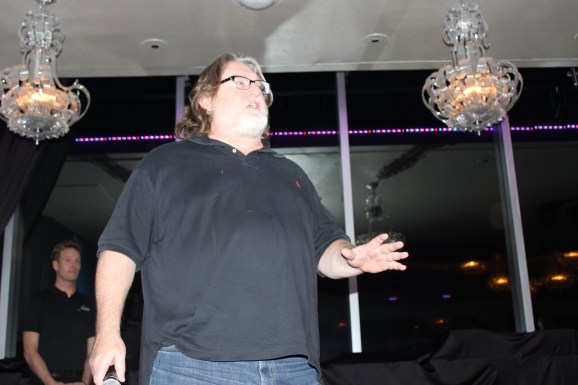 Gabe Newell, chief executive of video game company Valve, finally unveiled the company’s Steam Machines project and the hardware partners who will make gaming computers for the living room based on Valve’s designs.

Valve made the announcement in the swanky Ghost Bar at the Palms Hotel in Las Vegas, where the huge 2014 International CES tech trade show is happening this week.

The Steam Machines are an alternative to the game consoles and the Windows gaming PC, which Valve worries are becoming increasingly closed systems. They are an attempt to accommodate the requests of Steam PC gamers, who want to be able to play the games they have bought on Valve’s Steam digital distribution service in the living room.

“Competition is good,” Newell said. “A couple of years ago, we got worried about the issue of openness” for the PC.

In mobile, closed systems were becoming successful, and it looked like the PC might go that way too, Newell said.

So Valve is creating its own solution: the Steam OS (based on Linux), the Steam Controller (which makes it easy to use PC games on a big-screen TV), and the Steam Machines. Its 13 hardware partners will bring the machines to market.

There’s a lot of variation among the Steam Machines, Newell said.

Valve isn’t making its own hardware development yet, though it made 300 prototype systems itself. It will make that decision over time as to whether it needs to mass produce its own version.

Valve will sell its own Steam Controller itself.

“It will take a while for them to catch up,” Newell said, when asked if he could match the 3 million sales of the Xbox One. “We have 65 million.”

There are 250 titles running on the Steam Machines now. He said Valve needs to keep making it easy for developers to make more games.