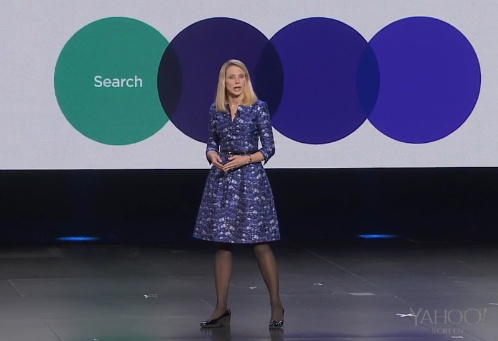 Yahoo! CEO Marissa Mayer during her keynote at CES.

Yahoo has acquired Aviate, a startup that automatically organizes the apps on your home screen.

Yahoo’s CEO Marissa Mayer announced the acquisition during her keynote speech at the 2014 International CES today.

“It is no secret we are amidst a massive and continuing shift to mobile,” Mayer said onstage at one of the world’s largest tech events. “But the shift is not just about proliferation, it’s also about how much time we are spending on phones. Weather, mail, finance, news — mobile puts them in your pocket and makes them a daily habit. We acquired Aviate because we believe home screens should be smarter and more personalized.”

It is Yahoo’s first acquisition announcement of 2014. The giant acquired a staggering 28 startups 2013.

Mayer opened her talk with some key numbers about the growth of mobile devices. She said the total number of smartphones is up 27 percent year-over-year, tablet usage is up 78 percent year over year, and by 2017 we expect to see 3.8 billion devices connected to Internet, which is nearly two billion more than we see today.

Smartphones have become an ingrained and integral part of how we consume information. They also provide unprecedented opportunities to collect data on users and customize experiences accordingly.

Mayer said the acquisition of Aviate will help Yahoo capitalize on this trend.

“Mobile has made our daily lives more consistent, convenient, and inspiring in ways didn’t think possible 10 years ago,” Mayer said. “Think about how much your phone understands about you — your contacts, calendar, emails and images — and what happens when that context becomes part of thee search experience. The future of search is contextual knowledge, and we are investing in the future.”

It categorizes your apps and rearranges your home screen depending on the time of day, giving you access to information you need when you need it. For example, it will prioritize weather and your calendar when you first wake up; traffic directions and music while driving; and photos, tips, and reviews of your favorite restaurant if you are out to dinner.

It launched in beta in October for Android phones by Paul Montoy-Wilson and William Choi, who used to work for Google. The company went through Stanford’s StartX accelerator, which makes it the third StartX startup Yahoo has acquired in the past year.

The financial details of the detail were not disclosed.