LAS VEGAS — After months of high-profile hirings, acquisitions, and rumblings of change, Yahoo CEO Marissa Mayer laid out her entire strategy for resurrecting the company’s media/news business during a keynote at the 2014 International CES trade show today.

Prior to today’s presentation, Yahoo had disclosed only a rough outline of what it was planning to do in media. Those plans included launching a new tech news vertical, refining mobile and desktop news products, and lots of premium content (video and written) — and there was a vague sense that Tumblr would be involved in a big way. Most of those plans weren’t even in place a full year, which means Mayer and team have been putting in some long hours getting things together.

If you’re unfamiliar with Yahoo’s role as a media company, then today’s keynote probably just looked like a gaggle of celebrities from all areas of the media world — some of whom now call Mayer boss, like popular broadcast journalist Katie Couric who came out to say that she’s very excited about her new job… and plans to do pretty much the same thing she’s previously done at the big news networks (interview important people).

This was the polar opposite of what former New York Times tech columnist and current head of tech news David Pogue said during his stint on stage. 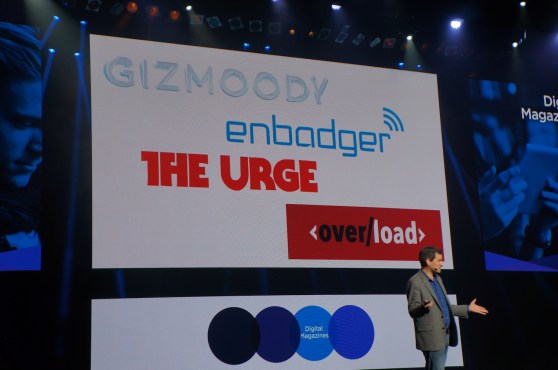 Pogue began by explaining that most tech news organizations simply don’t bother explaining things so that the average, non-tech savvy (but perhaps tech-curious) person could understand it. Well, I say “explained” but what it really sounded like was 15 minutes of showboating that was a click shy of full-on talking trash about other major tech news pubs.

“With Yahoo Tech, we’ve got a language we’re going to use that’s called English,” he said in reference to Yahoo’s new online technology news publication, which “launched” after Pogue pressed a magical button on stage. (See photo above for the headline on a story from Engadget’s Richard Lawler that was the subject of Pogue’s rant.) “If you don’t talk like that why would you write like that?” 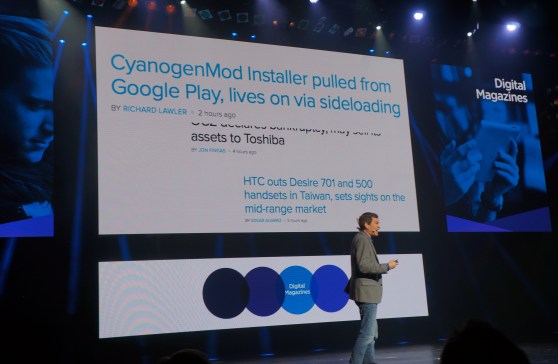 Pogue described Yahoo Tech as basically a magazine that comes out every day. That means there will be a finite number of articles and other content per day, but no breaking news stories — (at least that’s what I understand. Also, poor Richard.) Mayer later revealed that Yahoo Tech was built using Tumblr’s publishing tech, which looks very Pinterest-like and features infinite scroll functionality to keep you consuming as long as you desire. And when you click articles, the link opens up rather than pushing you to a new page.

Admittedly, the initial rumblings of Yahoo Tech didn’t get me very excited. But Pogue’s enthusiasm definitely changed that.

Yahoo Tech will be joined by a new food news publication that uses many of the same design elements and was also built using Tumblr’s tech. And as VentureBeat previously reported, Yahoo is also rolling out a new News Digest mobile app and has expansive plans to monetize Tumblr with ads.

It’s kind of hard to say whether Yahoo’s plan to rebuild its news products will be successful, given that there was plenty of time spent taking attention away from all the business-y talk. Couric and Pogue weren’t the only celebrity appearances during today’s presentation. Mayer, who earlier this year negotiated a deal to bring clips from Saturday Night Live to Yahoo exclusively, also brought out SNL’s Kenan Thompson and Cecily Strong for a weekend news bit poking fun at the past year in tech. That was followed by a three-song set by the talented John Legend to close out the show.