I don’t want a refrigerator that talks to me.

If I’m getting up in the middle of a Netflix binge session to get a beer, I can just open the door to the fridge and look to see if it has any more bottles. And if it’s empty, I will speak some choice words to my fridge — but I don’t want it talking back to me. I want a fridge that sits there, mutely, while I curse its lack of beer.

Appliance makers can’t seem to figure this out. This year at the International CES trade show — one of the world’s biggest electronics events, happening this week in Las Vegas — LG Electronics is proudly showing off an interactive fridge. It’s equipped with something LG calls HomeChat, as if chatting wasn’t something that people haven’t already been doing at home for millennia without LG’s help, thank you very much. In a video, LG showed an actor talking to his fridge, asking if any beer was inside — and the fridge answered. LG also showed how you could do things like send a text message to your vacuum.

LG’s not alone in adding useless features to gadgets that are perfectly fine without them. Crock-Pot now has a slow cooker that connects via Wi-Fi to your smartphone. That lets you control the pot via your phone, and it sends you text alerts when things are finished cooking. I guess that’s handy if you’re not at home — but isn’t the whole point of a Crock-Pot that you put something on in the morning, it cooks all day, and it’s ready to eat when you get home, so you don’t have to think about it? A company called Kolibree has a $99 connected toothbrush — I guess so you can compete with family members to see who brushes the most.

And it’s not like companies just started doing this. Last year, Samsung showed off an Android-powered refrigerator. We wrote, “It’s not as dumb as you think.”

I’m pretty sure we were wrong on that one.

Don’t even get me started on the new crop of 4K “Ultra HD” televisions. I don’t know who thought up the term “4K,” which refers to the number of horizontal pixels (approximately 4,000), whereas the last generation referred to vertical pixels, as in 1080p. It seems like a plot to confuse consumers. In reality, an Ultra HD television has a 3,840 pixels-by-2,160 pixels display, so if we were going to be consistent, we’d call it a 2160p screen, but I guess that’s awkward. No matter: It does have four times as many pixels as a standard HD screen.

What does that mean, you ask? Simple: If you want to watch 4 HD videos at the same time, you can do that on a 4K screen. Revolutionary.

Now, you might say I’m just a grumpy dude who doesn’t understand the future of technology. But I’ve been writing about gadgets and mobile technologies for well over a decade, and computers for even longer than that. Year after year, I have watched technology companies attempt to insert their gadgets into our living rooms and kitchens in the worst possible ways. 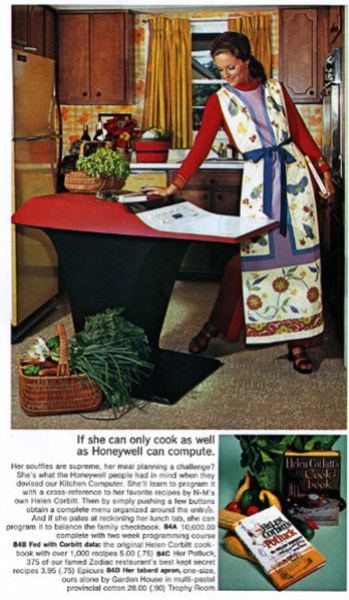 It’s possible that this kind of stupidity goes all the way back to the dawn of the computer age. For instance, take a look at Honeywell’s ad for a “kitchen computer,” which appeared in the Nieman Marcus catalog in 1969. The company never sold a single one, at least not in this configuration. (A few engineers did buy a more reasonably packaged version of the underlying computer, the H316, which they stacked into racks, the way computers should be.)

Even Trey Parker, the co-creator of South Park, has noticed the ridiculousness of the situation. In 2012, he made a crack at the big game conference, E3, about all these weird hybrid devices:

Now, CES is the electronics industry’s big chance to show off its wares, and you can understand why manufacturers like LG and Samsung want to be all things to all people. Who knows what’s going to take off? These companies’ executives probably figure that they better cover their bases, because it’s better to launch a product and have it flop than to miss the chance to be the next iPhone or Nest thermostat.

But amid all of this ridiculous so-called “innovation,” I want to call out one company that does seem to remember what technology’s role is. In its opening night keynote, Intel showed off a range of technologies that have the potential to add useful features to the things around us. A 3D-scanning camera array incorporated into a tablet computer? That’s useful in half a dozen ways, such as scanning objects for 3D printing, playing interactive games, or gesture controls.

Even Intel’s most potentially risible innovation, a “smart onesie” for monitoring babies’ vital signs, appeared well thought-out. It synced wirelessly with two smart coffee cups, so parents could keep an eye on their offspring’s health and temperature while they downed some much-needed caffeine.

Notably, Intel isn’t planning on going into the baby-monitoring business. Its onesie was primarily a demonstration of the capabilities of its Edison platform, a tiny computer, complete with wireless connectivity, packaged into an SD card-sized box. Now that’s useful, too: Think of all the ways that people have been using Arduino kits and Raspberry Pi mini-computers, and imagine doing them with a standard Intel CPU that’s about the size of a postage stamp.

But if Intel starts talking about putting its Edison computers into refrigerators, count me out.