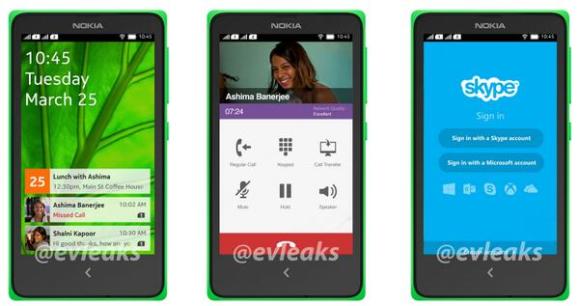 We may never get to see Nokia’s take on Android in person, but these screenshots give us a good idea of what Nokia is (or was) going for.

Back in December came the news that Nokia has been working on its own Android phone. The problem, as you might recall, is that Nokia sold its handset business to Microsoft last year, making it extremely unlikely that the company will take its Android plans any further.

Today, serial leaker Evleaks posted images of the Nokia phone’s interface, which is reportedly running off a forked version of Android (with an app store separate from Google Play). The interface looks pretty simple, with bright colors, a single on-screen button, and influences from both Windows Phone and Nokia’s own Asha operating system. In fact, it’s tough to tell this is running Android at all — which might be exactly the point.

Again, this is something that Nokia likely won’t ever get a chance to release. But it’s fun to imagine how things would look if it did.