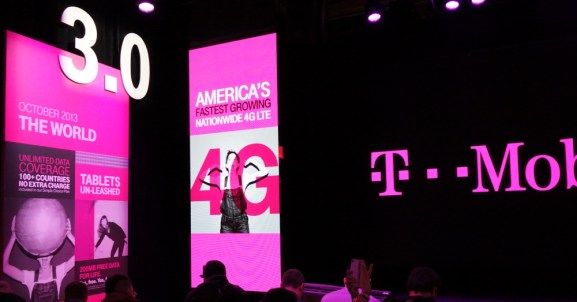 T-Mobile at the 2014 International CES.

LAS VEGAS — If you want to see how much can change for a tech company in a year, just look at T-Mobile.

T-Mobile just announced that it now has the fastest LTE network in the United States based on user-generated data from Ookla’s Speedtest.net. That’s a significant achievement for T-Mobile, which didn’t even have an LTE network a year ago.

Ookla’s data for the last quarter showed that T-Mobile’s average LTE speeds beat out its competitors at 17.8 megabits per second, compared to AT&T’s 14.7 Mbps average and Verizon’s 14.3 Mbps. (Sprint’s anemic network was even slower, at around 7 Mbps.)

T-Mobile’s CEO John Legere, who drove up hype for today’s news by crashing (and getting kicked out of) an AT&T party here a few days ago, made the announcement at the Venetian Sands as part of the International CES, one of the largest tradeshows in the tech industry.

“It started here with some connection last year with all of you and customers that this industry blows,” Legere said.

Ookla’s data differs from traditional wireless industry speed tests, which typically involve professional testers generating paid reports for carriers. Since it’s user-generated, Ookla’s data should give a more real-world sampling of data, though it’s harder to tell how accurate that data actually is. Legere points out that AT&T recently stopped claiming that it was the fastest 4G network in America in its recent ads, and he believes that T-Mobile’s network is the reason why.