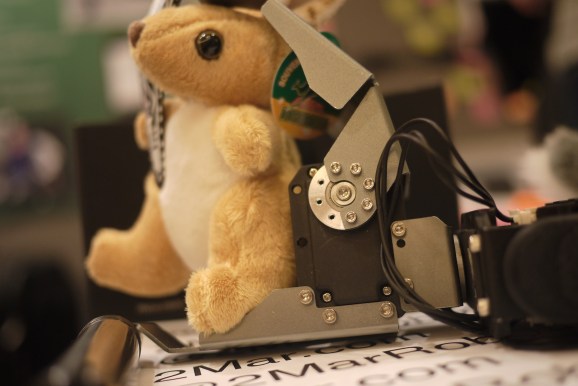 That’s because in between classes, she was founding a startup to help the disabled and a nonprofit to get more girls interested in robotics.

On the Eureka Park startup show floor at the International CES, Cheng showed off her babies: three robotic arms controlled by iOS devices, equipped with cameras, and fine-tuned for the needs of people with limited upper-body mobility.

“These sort of robots already exist, but we wanted to make it easy for people to use this every day,” she said. “The smartphone app gives you so much more control. It’s not just up-down-left-right.”

Those are basically the limitations of joystick-based competitors.

For Cheng’s version, the hardware and app offer a range of scoops, swoops, twists, and flips. The onboard camera, which shows the user what they’re interacting with, is an added bonus.

Cheng has tinkered around with adding speech recognition with mixed results.

Right now, iPads and iPhones can control the arms. An Android app is in the works, and Cheng is excited about possible integrations with smart glasses, which would enable a disabled person to do just about anything with a combination of eye movements and speech.

The robotic arm is still seemingly in a research/prototype phase, but Cheng is aiming for a “competitive” price to bring the device to market.

Here’s a quick demo of the arm by Cheng: