LAS VEGAS — You’ve probably seen plenty of articles warning you about the dangers of cellphone radiation — but what if you could use that energy to power something useful?

The Lune case, developed by gadget startup Concepter, does just that. With no battery or power connection to your iPhone, the case can light up when you receive a call.

Concepter was showing off the case at Eureka Park, the early-stage startup section of the International CES.

Check it out in action below:

Under the hood, the Lune sports a capacitor to harness the electromagnetic energy that your phone emits when it’s being called, as well as a controller for its LED lights. While it feels a bit like a gimmick, there’s plenty of potential for Lune’s notification to actually be useful — and if it truly doesn’t use up your phone’s battery life, all the better.

Researchers have been exploring the concept of harvesting electromagnetic energy for years now, but the technology hasn’t yet made its way to consumers. Most recently, German student Dennis Siegel showed off a method for recharging a AA battery using electromagnetic fields. 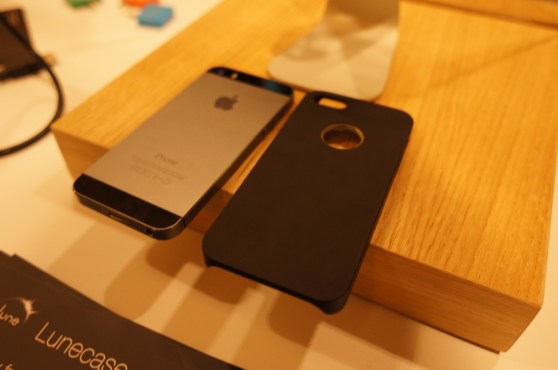 Above: Concepter revealed a plain iPhone 5S under the Lune case, though we weren’t able to see inside the case itself.

I was able to see a Concepter employee remove the case, which revealed a normal iPhone 5 with no extra battery pack. I wasn’t able to see the inside of the case, though, as Concepter claimed it was just a messy prototype. (So there’s a chance Concepter still snuck in a battery.)

Concepter founder Vlad Tislenko tells me the company plans to launch a Kickstarter for the Lune Case in February. Conceptr also developed the iblazr, a $49 LED flash accessory that plugs into your phone’s headphone jack. This also started out as a Kickstarter project.