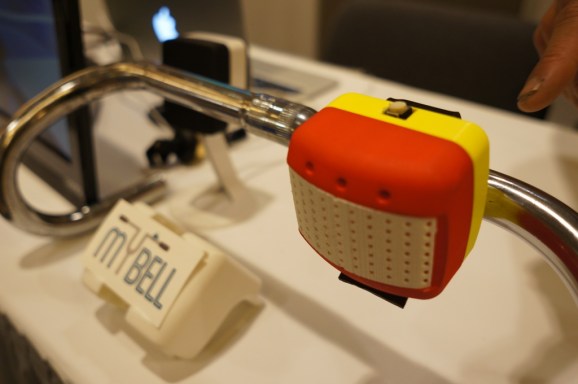 LAS VEGAS — It’s hard to fathom, but bike riders today still mainly rely on simple bike bells or air horns to get the attention of others.

Mybell, a Brooklyn-based startup, aims to deliver another option with its smart bike bell, which lets riders play custom alert sounds (just about anything in a sound file) and light patterns (yes, you can make it look like KITT from Knight Rider).

Peter Pottier, Mybell’s founder and CEO, tells me he came up with the idea after almost getting into a serious bike accident in New York City. The Mybell could help riders avoid such accidents, while also letting you show off a bit of bike bling.

While still in its very early stages, Mybell has already won several awards from the likes of New York Angels and Maker Faire. The company also won its booth at Eureka Park, the startup exhibit area of this week’s huge 2014 International CES trade show.

Pottier tells me there’s potential for Mybell to do more than just make sounds and light up. The electronics the company is using to implement its features could eventually allow it to do more complicated things, like potentially helping bikers to track how long they’ve ridden.