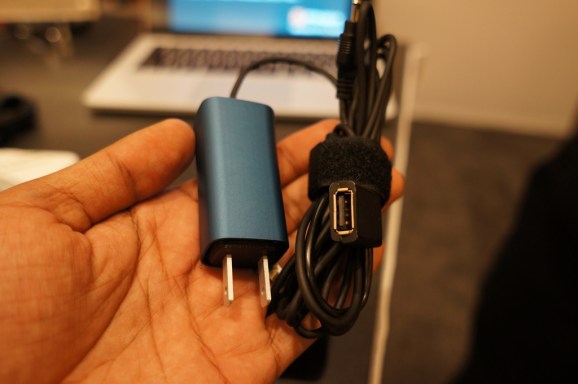 The Finsix laptop charger -- look at how small it is!

LAS VEGAS — Even though our laptops have become thinner and lighter, the lowly power adapter remains surprisingly bulky. Finsix’s tech could change that.

The startup has created a 65-watt laptop charger that’s about a third of the size of today’s devices. It also includes two USB charging inputs, which are powerful enough to juice up tablets.

Finsix demonstrated its technology at Eureka Park, the startup portion of the influential International CES tradeshow, and it was clearly a step ahead of most other startups there.

Finsix’s technology relies on new power-conversion techniques to cycle power up to 1,000 times faster than existing adapters, said Jim Kardach, the company’s director of technology integration, in a brief chat.

Finsix CTO and cofounder Anthony Sagneri spent years developing the technology at MIT, and it’s now almost ready to hit the market. The company plans to launch a Kickstarter for its adapters in March, with an eventual retail price of about $90. The company is also working to develop a MagSafe version of its adapters for Apple’s laptops.

After coming across plenty of companies at CES that clearly aren’t going anywhere, Finsix’s technology was a bit of a revelation. With years of research behind it and tech that leapfrogs traditional computer makers, it shows us that even tiny startups have the potential to leave a big mark on established industries.

Finsix is based in Menlo Park, California and has raised $5 million so far from Arunas Chesonis, Venrock and other angel investors.