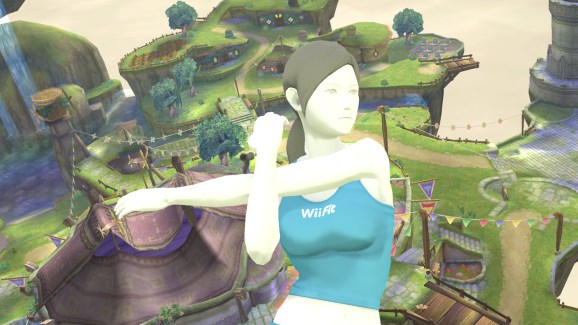 Nintendo is running a victory lap after successfully fighting off a patent lawsuit.

The gaming company announced today that it has acquired the patent portfolio of IA Labs, a game developer that makes exercising hardware and software. Nintendo picked up IA Labs’ former patents in a forced sheriff’s sale that came about because IA Labs failed to pay court-ordered damages to Nintendo after losing a lawsuit.

In April 2010, IA Labs sued Nintendo for patent infringement relating to the Wii, Wii Remote, Wii Fit, the Balance Board, and other products. Nintendo successfully defended against that case. IA Labs filed an appeal that was eventually overturned in June. Following the failed appeal, the Montgomery County court in Maryland ordered IA Labs to pay Nintendo’s costs in defending the appeal.

When IA Labs failed to pay those damages, the Montgomery County sheriff ordered a sale of the company’s remaining assets. Nintendo picked up the patents as partial repayment for its litigation costs.

“Nintendo’s track record demonstrates that we vigorously defend patent lawsuits, like the IA Labs lawsuit, when we believe we have not infringed another party’s patent,” Nintendo of America deputy general counsel Richard Medway said in a statement. “This includes holding those who sue Nintendo responsible for the costs and expenses incurred in patent litigation. Nintendo has a long history of developing innovative products while respecting the intellectual property rights of others.”

Since losing the lawsuit, IA Labs has collapsed.

In a press release, Nintendo referred to IA Labs as a “patent troll,” which refers to a person or company that files a number of patents not necessarily to protect their products but to issue numerous lawsuits against more successful companies in hopes of getting a big settlement or damage award.

This legal tactic is common in tech industries.

In October, the chairman of the House Judiciary Committee, Rep. Bob Goodlatte (R-Va.), introduced a bill to put a stop to patent trolling. The proposed legislation would require patent holders to detail their case early in the lawsuit process. The loser of a patent suit would also have to go to lengths to prove their case was justified or else they will have to pay all legal fees incurred by both sides, which could cause many patent trolls to think twice before filing a claim.