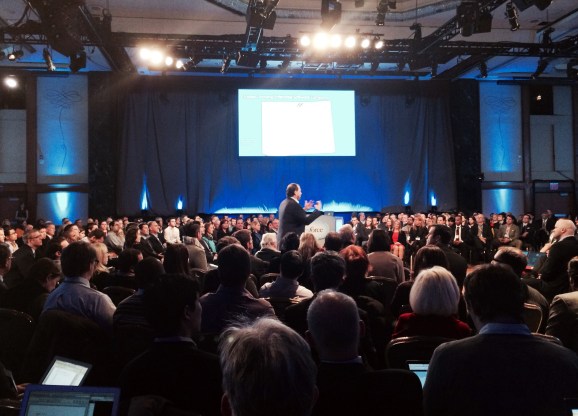 Benioff talks up Salesforce1 at the Hilton Midtown in Manhattan

NEW YORK CITY — Salesforce just kicked off its Salesforce1 World Tour, championing its new, mobile-friendly platform to current and potential customers around the country. The first stop was Manhattan, where CEO Marc Benioff delivered a keynote nearly identical to his boisterous presentation at Dreamforce 2013, down to the smart Philips toothbrush in his pocket. (He assured us later that it was a different toothbrush.)

The real fun started after the keynote ended, when a few journalists (including this VentureBeat reporter) had a chance to sit down with Benioff and ask him anything. Here’s an abbreviated version of the roundtable.

Can you talk about the relationship with Oracle?

Marc Benioff: It’s multidimensional. I went to work for Oracle in 1986 when I graduated from USC, and I had a phenomenal experience there, and I was mentored by Larry Ellison, which was very powerful in my 20s and 30s. I’m still very good friends with him — he just came over to my house for lunch, and I just went over to his house. We have a very good personal relationship.

We are also a very good customer of Oracle’s. We bought Oracle licenses, and we built Salesforce.com on the Oracle database, and we continue to use the Oracle database. It’s an important part of our infrastructure. We are constantly looking at all of our core technologies — not just Oracle, but everything we do — and [ask if] it’s still current. Is it still modern? We use a lot of things. For example, we have a company called ExactTarget [that uses] Microsoft SQL Server. Microsoft is also an important partner of Salesforce.com.

But we just signed a 10-year deal with Oracle, and that cements that it’ll be part of our infrastructure — and it’s working really well for us. It’s very reliable, and I recommend the Oracle database to customers. Obviously, there’s a lot of choices today for data management that did not exist when we started our company 15 years ago, and a lot of companies creating their next-generation infrastructures may or may not be using Oracle.

The 10-year deal is basically all Oracle products. We can just use whatever we want.

What do you think about Microsoft’s capability to compete right now?

Benioff: It’s been very limited. I think the Steve Ballmer decision was a very good decision by Steve and by the board, but it’s probably five years too late.

I know that company really well, and I have a huge amount of respect for them. I’ve competed with them over the last 25 years. I think Bill Gates is amazing; he’s my role model. He saved 10 million lives in the last decade. It’s amazing. And if you look at Bill Gates, he’s happy, he’s joyful, he’s relaxed, he’s having a good time — and while he was at Microsoft, he was miserable and kind of a curmudgeon.

But while Bill Gates has evolved, Microsoft has not. They need to push the reset button on vision. The whole concept of Windows everywhere was a really interesting mantra 20 years ago, but it doesn’t work today, and it’s led them down some very dark paths to products that are not any good. Number two, they need to push the reset button on people. So they’ve started with Ballmer, but they have an issue that they’re going to have to address: They’ve got two former CEOs on the board. I think it’s hard for the CEO coming in with two CEOs looking over their shoulder, so I think they’re going to have to address that. They have really unbelievable assets that every company in the world wishes they had — in brand, market position, technology, and monopoly — but they can’t execute it.

Any comment on Microsoft Dynamics CRM’s effectiveness as a competitor?

Benioff: They’re a follower, not a leader. They continue just to follow. This is a great market, and we have a lot of competitors: Microsoft is one, Oracle is one, SAP is one, and I could probably list 10 more — and that’s a good position to be in on our side, because we’re No. 1. We’re No. 1 in every [Gartner] magic quadrant, No. 1 in market share and revenue. They won’t even publish their revenue figures.

I don’t think that [the Edward Snowden NSA revelations] can stop the future, but I think they can shape the future. So I think that this is a healthy and important discussion that will change the world in a positive way. 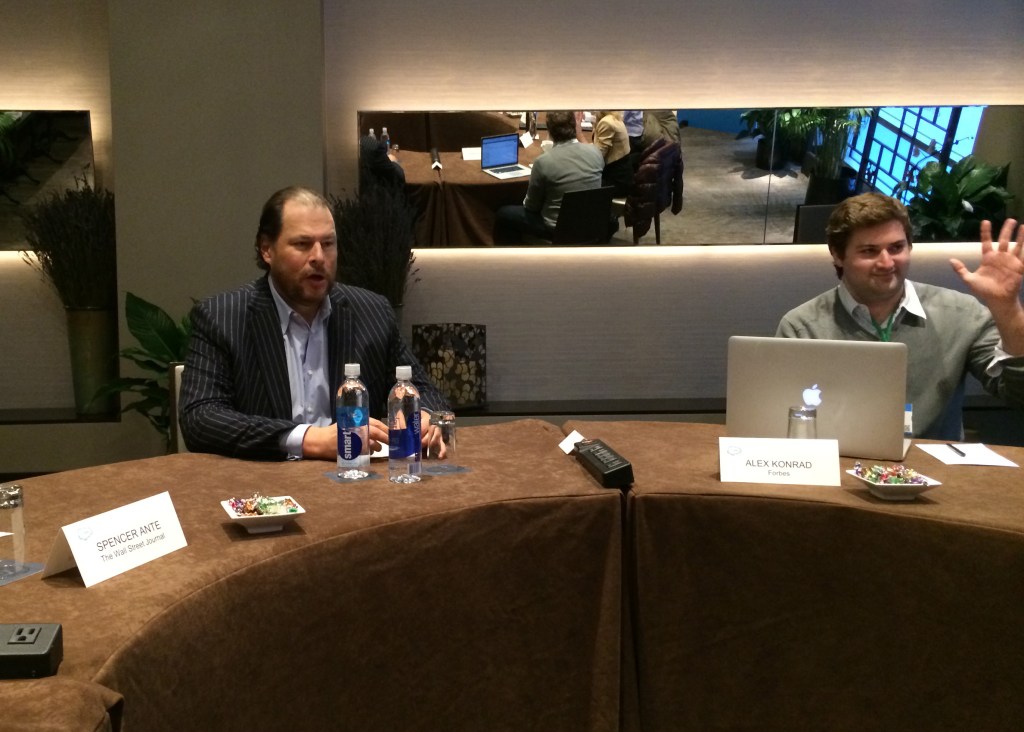 Above: Salesforce’s Marc Benioff chats with a roundtable of journalists.

What’s your acquisition strategy for 2014? What areas are you still looking to fill out?

Benioff: There are five [sectors] that are really important to us. We are the No. 1 provider of Salesforce automation. There’s also customer service, marketing, and platform. Those are the four key pieces, and the fifth — which people didn’t really see at Dreamforce — [is the] significant enhancements to our analytics capabilities. We’ve bought analytics companies, and we continue to invest in analytics across all units. There is an analytics and data warehousing revolution underway in this industry, which is amazing, and we are a major player in analytics and data warehousing. We don’t amplify it as our fifth cloud, but this is clearly another growth path for us.

Do you need to have e-commerce capabilities?

Benioff: I think that’s a very fair question, and a question we ask ourselves all the time. But to this point we’ve said no, because we have very good partners in the e-commerce area. If Gartners’ analysts were here, though, they would say, service, marketing, and e-commerce are critical parts of the customer relationship management. But today, our customers are not driving us to that place, so we haven’t made strategic moves in that area; instead, we view that as an ecosystem partnership opportunity. You could just go to the AppExchange and look at e-commerce, and dozens of those companies are there.

What do you think about OpenStack?

So, the chairman of Rackspace said you were going to be joining OpenStack. …

Benioff: I thought that was a strange comment. I had just met with him on a completely unrelated subject — Heroku running on his platform — and then I read that article and I’m like, “This is not true.” We have a bit of OpenStack through acquisition, but it’s not core. We have bought all these companies, so there will be things that we have, but when you look at those transaction records — over a billion transactions a day — we’re not depending on OpenStack to deliver those transactions. Maybe it’s a good idea. It’s not that I don’t believe in OpenStack: I love OpenStack’s vision and strategy, and I’d love to bring more of it into Salesforce, but it’s not a near-term reality for us.