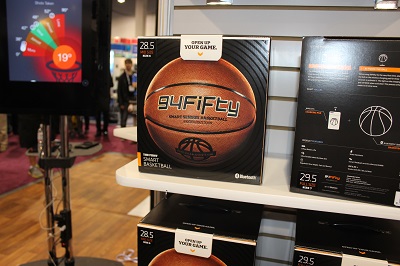 The 94Fifty smart basketball has nine sensors to help you shoot better.

LAS VEGAS — If you haven’t played basketball lately, you might want to try out the 94Fifty smart basketball from InfoMotion Sports Technologies. Its sports training analytics helps you shoot or dribble like the pros.

“We turn the object into a digital coach,” said Michael Crowley, the chief executive of InfoMotion, in an interview with VentureBeat.

The 94Fifty is an example of the big trend at the 2014 International CES. The “Internet of things” will consist of previously “dumb” devices that become much smarter with the addition of sensors, connectivity, and processing power.

The Dublin, Ohio-based Infomotion Sports Technologies has been shipping its 94Fifty Smart Sensor Basketball for a couple of months. The ball records your shooting, diagnosing how you shoot and offering corrective advice.

The ball is a lot more complicated than your standard basketball. It costs $299, sports nine sensors, and has a dock for charging.

But the app that comes with the ball gives you immediate real-time feedback, just like a basketball coach would.

“A lot of kids don’t have access to real coaching,” Crowley said. “The number of kids quitting sports early is at epidemic levels, and the No. 1 reason is lack of learning.”

The ball’s sensors give details on shot speed, backspin, and arc measurements. It transfers that information to an iPhone or iPod touch (it works with iOS7) via a Bluetooth Low Energy connection. The companion app helps a player train on specific skills, work through levels of increasingly difficult workouts, and compete head-to-head with others around the world via Twitter.

Here’s our video interview with Crowley at CES.