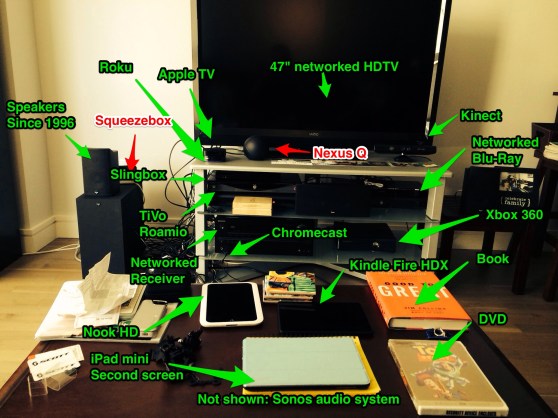 It’s another year of skipping out on the International CES for me. While many tech scribes are in Vegas fighting huge crowds, insane traffic and ridiculous cab lines, I decided to sort through my old photos and scan them in with an Evernote ScanSnap I’m reviewing. I came across an old photo of my living room in 2002. That picture (below), alongside one I took of my living room this morning (at the top), illustrates how much technology has changed in the past 12 years.

It also illustrates how much CES has become irrelevant in that time as the old-line consumer electronics companies have been losing the race to their nimbler Silicon Valley- and Seattle-based rivals. The most notable items in my living room today — the iPad Mini, Kindle Fire HDX, Chromecast, Apple TV, and Roku — weren’t introduced at CES. The only one that has a solid CES lineage is TiVo. TiVo announced and demoed its original digital video recorder at CES — in 1999. The current version, the TiVo Roamio, came out in 2013, but not at CES. (See my review of the Roamio.) (Disclosures: I own stock in Apple and Google.) 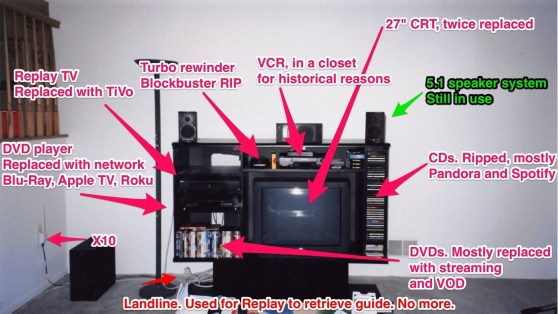 The biggest difference between the two pictures that you can see is the decline of physical media: All of my CDs have been ripped to MP3s. The DVDs sit in a box in a closet. The VCR is also in a closet on the off chance that some day I may need to convert a VHS tape to digital. All of the electronics have been swapped out for new versions, with the exception of the speakers. I’ve had that Boston Acoustics surround sound system since 1996 and it still sounds great. (I’ve been tempted to swap it for a Sonos Playbar, but my friends who have that tell me its suboptimal compared with a true surround sound system.) Another important difference: with the exception of the TV, everything has gotten smaller.

The more important difference between the two pictures is what you can’t see: almost everything has become networked. In 2002, I had a ReplayTV DVR. It was the only device in my living room that was connected — and it did so using a dial-up phone line to get program listings. Now, nearly everything is connected. The speakers are the only thing without an IP address. Most of the other devices connect over Wi-Fi. The TiVo, Apple TV, Roku, Slingbox, Xbox, receiver, and Blu-ray player all have apps.

You also can’t see the services that sit in the cloud that support all of this technology. Although all of my CDs have been ripped, more often than not, I listen to Pandora, KQED, or Spotify, all over the Internet. I found the AM/FM antennae that go with my receiver and decided not to bother hooking them up; I stream the few radio shows I care about, either directly through the station or through the TuneIn app.

I used to collect DVDs; I’ve all but stopped. I don’t want more physical stuff to haul around.

But there are limitations to the changes in technology driven by content licensing and laws. I was going to remove the book and DVD from the “now” picture, but I realized they are there for a reason. I bought “Good to Great” for $4.35 from an Amazon marketplace seller (36 cents plus $3.99 shipping). I could have bought the Kindle edition, but that is $16.

With print books, DVDs, CDs and Blu-rays, you can legally resell them under the first-sale doctrine. Often these items have little value, so you can buy second-hand copies for cheap. But the first-sale doctrine doesn’t apply to their digital equivalents. In most cases, I can’t buy a Kindle copy of the book that someone has finished. (There are companies trying to create secondary marketplaces for digital goods, but that requires the permission of the content owners.)

Hit movies like Toy Story are often unavailable on digital services or are expensive. Toy Story isn’t on Netflix. I can rent it from Amazon for $4 or “buy” a digital download for $20. (Note that Amazon sells the DVD for $17, plus shipping — though shipping is free if you subscribe to Amazon Prime.) For all the whining about digital media that content providers do, they actually have a lot more control over pricing for digital goods than they do for physical goods.

My TV programming should all be available in the cloud as well. But TV programmers have been reluctant to let that happen because they are wary of digital and they want to keep the lucrative revenue streams from cable companies coming in. Innovative services like IAC’s Aereo are tied up in litigation almost from birth. Even services created by programmers, like Hulu, have a patchwork of restrictions.

Even with all of the changes over the 12 years, it sure doesn’t look like I’ve simplified things, has it? One of the current challenges is that some services are only available on some platforms. And the quality of the implementations can vary a lot by platform. Some services have done a great job of being everywhere. I can get Netflix and Hulu on the Tivo, Apple TV, TV, Roku, Blu-Ray, and Xbox. But I can only get iTunes Radio on my Apple TV.

What should we expect in the next 12 years? Don’t look to CES for the answer. The last few technologies hyped at CES — 3D TVs and OLED TVs — have fallen flat on their faces. The last major announcement during CES that mattered was in 2007. But that was Steve Jobs announcing the iPhone — in San Francisco, not at CES.

Pop quiz for electronics geeks: one product visionary is represented in both pictures. Can you guess who it is? Leave your answer in the comments.