For years, Petros Media has made apps for different clients. Now, it has taken a turn at making its own original game. The result is FlipSquare, and it’s a deceptively simple puzzle experience. 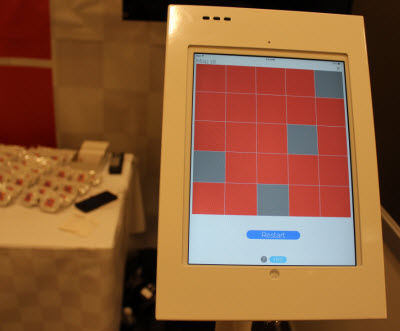 Kenny McCann, co-founder of Stockton, Calif.-based Petros Media, showed it off at the Eureka Park startup zone of the recent 2014 International CES tech trade show in Las Vegas. And the app has been live for a few weeks. During that time, without any marketing spending, the app has had 20,000 downloads.

In the game, you start with a grid of red blocks interspersed with gray ones. You pick a square to flip over. It turns green. Then, you can pick the next square to flip, moving either left, right, up, or down, but not diagonally. You keep picking squares until you clear the whole grid, turning all the squares from red to green. If you run into a dead end, you have to start over.

It’s like a maze or Rubik’s Cube. FlipSquare is Petros Media’s first original app and first game, McCann said in an interview with VentureBeat. It’s a very different kind of game than many that are hitting the market. Other developers are in a graphics arms race, creating movie-like animations on mobile devices. But the visuals for FlipSquare are refreshingly austere, with no frills.

“It’s pretty deceptive,” McCann said. “It helps with your spatial reasoning. You think ahead about your next move. It’s not mind-numbing like a Candy Crush. There’s a lot of strategy.”

It’s a cool idea. One of the partners thought about the concept a few years ago. But Petros Media kept making apps for others. Its work includes apps such as Retreat Guide, Boostane, MyFertilityMD, Veritas, and the Teaching Créche.

As gaming became hotter and hotter, the team decided to make the original title. The company took on some investment to make the game, and now, it is waiting to see how everything goes.

An Android version is coming soon. The developer has three founders, McCann, John Johnson, and Matthew Sich. They can tap other help as well.

“We’ll take your idea and develop it,” McCann said. “We’ll do it at a good price and personal customer service too.”

But McCann says the company will think about making more of its own games, too.