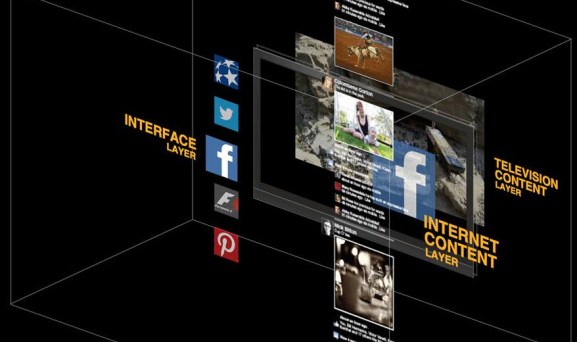 InAir has an interface for 3D TVs that lets you navigate beyond the TV's borders.

Bigger televisions and web connectivity haven’t solved one of the problems about watching TV: It’s still too hard to navigate through all of the channels, social media, and meta data about what you’re watching. 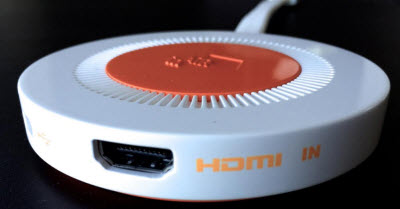 Above: The InAir TV box connects via an HDMI port.

SeeSpace hopes to solve that with InAir TV, a 3D user interface that resembles the three-dimensional gesture-based UI that Tom Cruise used in the science fiction movie Minority Report. The San Francisco company unveiled its interface, which offers you visual information in the space between you and the TV, at the Eureka Park startup section of the 2014 International CES tech trade show last week in Las Vegas. The company is off to a good start, raising money for production via the crowdfunding site Kickstarter.

It works well with 3D TVs and gesture-control equipment, but it doesn’t require either.

InAir has tapped human-machine interface experts to design a kind of visual overlay that comes out from your TV. You can navigate it using gesture-control devices such as Microsoft Kinect, or you can use a remote control. You can drill down on information through nested menus. But the screen’s real estate still belongs to whatever show you are watching. In that way, it doesn’t ruin your TV experience. 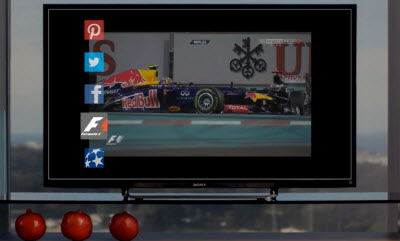 The company calls its experience “augmented television,” since it puts an augmented reality overlay on the real world in front of your TV. It’s like an extension to your TV screen, or a hologram that folds out seamlessly from the TV.

Of course, one of the problems is that 3D TV is dying out fast. Few TV makers touted 3D viewing at CES. But that may be because they didn’t have something like InAir to begin with. The real question is whether the 3D is a novelty or if it truly makes it easier to navigate through a bunch of information.

SeeSpace and InAir came from conversations between Nam Do, the founder of brainwave control firm Emotiv, and Dale Herigstad, a four-time Emmy winner and TV interaction designer.

“After a long conversation on user interface, we realized that we had a lot of similar opinions on how bad smart TVs are and the unfixable problems that go with its business model,” Do said. “We realized that the space in front of the television is wide open.”

Do’s Emotiv pioneered the use of brain waves to control games and consumer electronics gadgets. He left the company more than a year ago, but it continues to move forward, having raised a $1.6 million stash in 2013 via Kickstarter.

Then he joined with Herigstad, Jerry Gramaglia (a former chief marketing officer of Pepsi), and Anne-Marie Roussel, a former acquisitions head at Sharp. That was just nine months ago — and they showed up with a demo at CES.

With InAir TV, the company has created an HDMI-connected passthrough device that sits between your cable TV box and your TV. It understands what you are watching on TV and superimposes relevant internet content in the 3D interface. You can manipulate that content with your hand, if you’re using gesture controls, a smartphone, or your remote.

“We bring contextual internet content ‘live’ in front of your TV screen,” Do said.

Do said that he believes TV makers and content providers realize there’s a problem with current smart TVs, because they’re not that smart. People use tablets and smartphones to multitask while watching TV, but they have to look down to their devices, taking their eyes off the screen. With InAir, you can keep watching your show and navigate through second-screen information at the same time.

“And regardless of whether our current TV manufacturers and network operators support that or not, the audience is doing it in their own space — the space in front of their TV screen — on their mobile devices,” Do said. “Our vision of future television experience is a seamless blend of TV and Internet on one viewing dimension.”

With InAir TV, you can do a web search on keywords. It supports modes where the InAir interface appears to float in the space in front of your TV. It supports streaming over Wi-Fi and access to bookmarked content.

The company has 11 full-time employees. It was founded in March 20, with headquarters in San Francisco, a design team in London, and engineering in Hanoi, Vietnam. The founders have bootstrapped the company so far. The Kickstarter campaign is already more than 50 percent funded after four days. The company will be able to start production with that money, if the campaign is successful. 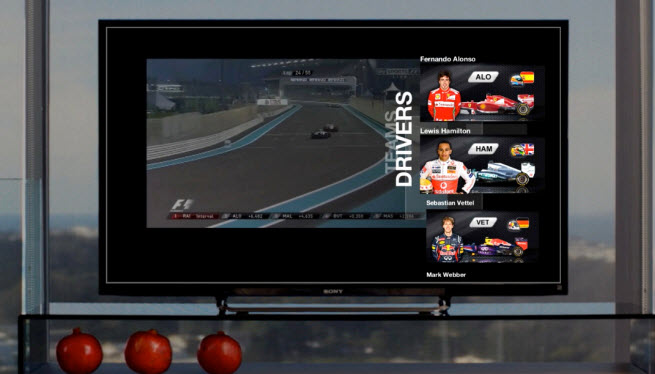 Above: InAir’s presentation during Formula One auto-racing coverage.