Defunct publisher Midway once made a game that mocked Michael Vick for going to prison and having a sexually transmitted disease.

That’s just one of the things we discovered when we went back to dig up dirt, interesting facts, and buried stories involving sports-related games. For a lot of people, gaming doesn’t get much more pedestrian than the sports sim, but we found secrets involving sex, cheating, and laziness in some of the most popular sports titles of all time. Now, let us share them with you.

5. Midway couldn’t get the NFL license for Blitz, so it made fun of Michael Vick’s herpes

The National Football League takes itself very seriously. That’s often at odds with the on-field violence of the games and off-the-field behavior of many of the players. While ESPN can get away with covering the cocaine-snorting, prostitute-hiring antics of the ’90s era Dallas Cowboys on its SportsCenter news program, the NFL would never permit a partner company to make a licensed product (like Madden NFL) that portrays players partaking in illegal activities.

Of course, it couldn’t do anything to stop Midway from doing the same with Blitz: The League II.

In 2004, the NFL signed an agreement that gave EA Sports the exclusive license to the teams and players of the league. This left competitors in a tough situation since football fans were much less likely to purchase a game that didn’t feature their team or favorite player.

In an attempt to survive, Midway decided to make a game that stood out in the best way possible: by featuring sex, cheating, and drugs.

In 2008, Midway released Blitz: The League II. This football game doesn’t feature any real teams or active players, although it does include retired linebacker Lawrence Taylor. Instead, The League II tells a number of drama-filled stories that are clear references to real scandals.

For example, the game features a character named Mike Mexico, who is a former Washington Redhawks quarterback that is serving time in prison. In 2005, Michael Vick made headlines for allegedly getting treatment for genital herpes under the false name “Ron Mexico.” In 2007, a court convicted Vick on animal-abuse charges stemming from a dog-fighting ring that he operated. He served two years in prison as part of his sentencing for that crime.

Mike Mexico is an obvious stand-in for Michael Vick.

While the NFL couldn’t control what Midway did with its Blitz games after the NFL exclusivity deal, the National Collegiate Athletic Association (NCAA) happily exercised its power over EA Sports in 2003 and 2004. 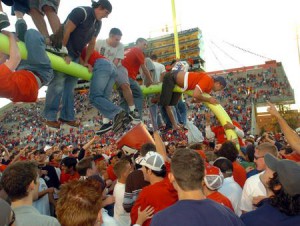 The thing about making a sports game year after year is that developers find it difficult to make significant improvements. This forces EA Sports to often focus on improving the atmosphere to make things feel more realistic.

In 2003, the developer came up with an idea to have the fans storm the field and tear down the goalposts after big wins in certain modes. The designers loved the idea so much that they got to work on it very early in development … and that was their big mistake.

“We spent all year working on an awesome end-of-game scene,” NCAA producer Ben Haumiller told GamesBeat. “But we had not gone through the proper approval channels, and at the very end of the cycle, the NCAA made us pull out the scene.”

EA finished the feature and was read to ship it, but NCAA didn’t want to appear like it was endorsing the destruction of property.

The thing is that NCAA made its decision so late that EA Sports actually ended up sending out review copies that include the climatic victory scene.

“The feature was even called out in a couple of reviews for how awesome it was,” said Haumiller. “But from that point forward, we made sure we got all of our concepts cleared before working on them.”