Pirates are neat, and ninjas are OK, but I’m all about Vikings. Thankfully, I’ve got The Banner Saga to give me my Viking fix.

Developer Stoic Games released The Banner Saga today on Steam for $25. It’s a tactical role-playing game that has players taking the role of several characters in a cold, Nordic world where the sun has come to a stop in the sky. Gameplay is a mix of strategic, turn-based battles and conversation-based storytelling.

We decided to fire up The Banner Saga and record the first 20 minutes to give players an idea of what the game is like. You can check it out in the video at the top of this post.

Stoic comprises a number of former BioWare developers. The studio’s founders include Alex Thomas, Arnie Jorgensen, and John Watson, who all worked on the massively multiplayer online title Star Wars: The Old Republic. They left BioWare and brought their idea for Banner Saga to the crowdfunding platform Kickstarter in March. 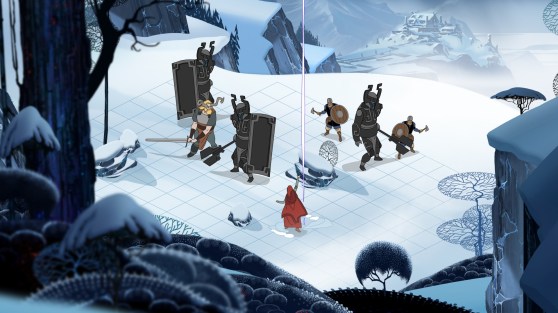 Above: Combat in The Banner Saga.

With a goal of $100,000, the developer promised an intricate story, beautiful art, and deep gameplay. The project ended up raising more than $700,000.

The final result is just as beautiful as the first screens made it appear. The Banner Saga uses a hand-drawn art style combined with what looks like a high-definition version of 1980s or ’90s Hollywood animation.

As for the gameplay, what we’ve played so far is reminiscent of Fire Emblem and XCOM: Enemy Unknown, which is some excellent company.