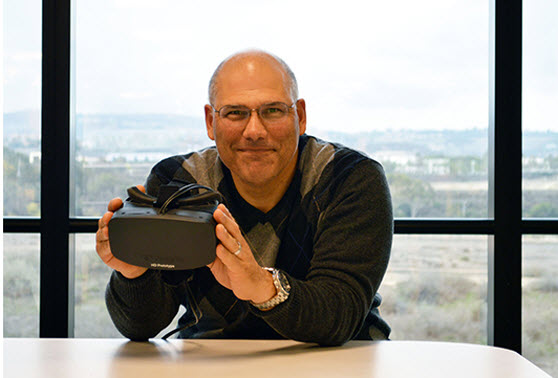 Above: Dave DeMartini, head of worldwide publishing at Oculus VR

GamesBeat: Has David DeMartini been earning his paycheck so far?

Iribe: [Laughs] It’s always nice to bring somebody on board when there’s a bit of a backup of things to do. David came on board at a time where we didn’t have anyone talking to the community about publishing, about how we’re going to help seed the ecosystem. We had anticipated raising a significant round, series B, and we knew we wanted to use some of that round to invest into the ecosystem in a number of ways.

We needed someone at the helm to steer that and keep us out of trouble. Oculus is a company that often does things differently. But we don’t want to do things so differently that we start to get into trouble. David has an incredible amount of experience and a Rolodex of contacts for doing publishing deals from his time at EA. It’s been enlightening to have someone with his expertise on board.

It was the same thing we did with our COO, Laird [Malamed]. He came on board with a lot of experience shipping product. It’s incredible, when it comes to logistics and supply chain operations, what Laird has been able to do. David is the same. We need some veterans to come on and make sure the ship steers in the right direction.

David DeMartini: The team, based on how they’ve approached everything, has a better relationship with the community than any team I’ve ever been involved with, including the most successful franchises at EA. You don’t want to do anything to spoil that mix. You want the team to be the way the team is. You don’t want them to get all corporate and change at all. They’re always honest. The blog posts are very truthful and direct.

We’re starting to see, after a groundswell of hobbyists and enthusiasts, a tremendous number of triple-A developers on the gaming side whose attention has been caught by the latest round of changes. With all the pressure coming from the community, you’re going to see a lot of large developers who want their content to experience the full immersion that you get when you’re on our platform.

All this stuff with regards to latency and comfort is being built so that not just a million people can experience, but tens of millions. They don’t just want to experience it with games, either, but with 360 video, attendance at live events, and other things that make this publishing job we’re doing so much more exciting. It’s not just video games. It’s content that people will be able to consume on a great platform. 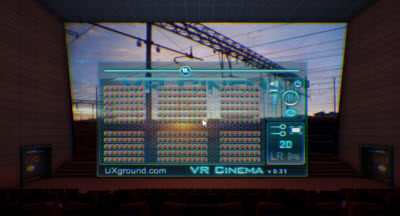 Iribe: We’re still learning what those experiences are. VR Cinema, maybe eight months ago we got to see it. We weren’t thinking about any of that. We were thinking first-person games. Now it turns out that first-person games are often too intense for many people, at least if they have a lot of fast movement. It’s these other experiences – things like VR Cinema or 360 video – that turn out to be incredibly immersive and very complementary for VR. It’s far beyond just gaming. And we’re also learning what in gaming works really well.

It’s awesome to have this team. Aaron has been on the front line on the developer side, going in and helping them get questions answered and understand best practices.

DeMartini: They’ve been moving very quickly. It’s not particularly difficult to interact with the SDK and have your game at least up and running. Within a week or two people are able to see their stuff on the screen. Not being too esoteric, but when you think of the potential of virtual reality for people with disabilities and other things, people who can’t get up out of a chair—They can go into these worlds in a comfortable way and experience things. Kids in a classroom or people with handicaps can experience things that they would never experience in another way. The possibilities are so exciting.

GamesBeat: I saw something yesterday that was pretty interesting: a little German startup called Panono that has 36 cameras in a ball. It takes pictures of everything around it. The app uploads those pictures, and it stitches it all together perfectly.

DeMartini: Yeah. You take that output and put it together with the right kind of positional audio, so that if it was a picture of a beach, you hear the waves in front of you, the ambient sounds behind you. Then you take that experience and figure out how you could make it into a shared experience among multiple people. You’re transporting yourself and your friends to the beach in Hawaii when you’re all sitting somewhere in El Segundo.

Iribe: Whether it’s a still photo or live video, we’ve been chatting about it. One of the first things David said when he got in was, “This is going to be so big for 360 video.” We were like, “Yeah, but games!” And he’s like, “But 360 video!”