DeMartini: You can’t forget where your core is. The core is games, and the gaming folks have been fantastic with their stuff. But the reach is so much broader. I’m sure that’s what the investors were really excited about. It’s so easy to see the possibilities. 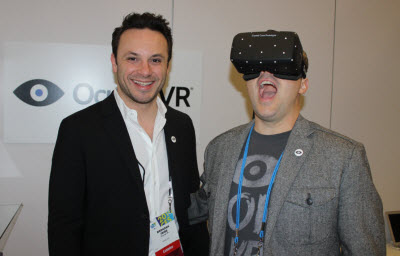 Above: Brendan Iribe and the masked Oculus face of Aaron Davies, head of developer relations.

GamesBeat: They had these drones that could carry them, too.

Iribe: Absolutely. Then you get the video aspect of it —

DeMartini: Or imagine that camera on the head of a surfer. Someone who could never surf could experience that. Or at a concert. I’m never going up Mount Everest, but someone could do that climb, and you’d get to experience it with them.

Iribe: Especially as the 360 camera technology gets to higher resolution. It’s going to become closer to a photo-real experience. Your brain can be tricked into thinking that you’re really on Mount Everest or wherever. It can help with a number of things beyond just gaming. Virtual travel. A lot of people never get to leave the U.S. In the future, with VR, hopefully the world will be a much smaller place.

GamesBeat: Sony’s now promoting VR in a way. I don’t know what your reaction was to their announcement.

Iribe: They announced an update to their HMZ movie viewer line. It’s the same viewer they’ve had out now for several years. It’s a headset with a very small field of view. In the past it didn’t have head tracking. It was marketed and used for watching movies. They’re starting to add some tracking to it. I can’t speak to them, but it’s a different category of product from Oculus. It’s considerably more expensive, last I heard – somewhere in the $1,500 or $2,000 range. It’s made by the TV group. It’s not part of the PlayStation group.

It’s just a different category. Things like Glyph and some of the other movie viewers are in that category. We’re in the VR category. It’s just like when people say, “What about Google Glass?” They’re very different things. Google Glass is a projected reality, a little notification system. It can be a great experience, but it’s different from virtual reality, changing the world that you’re seeing.

Right now, Oculus is the only company leading the charge on VR. I’m sure that will change in the future. Competition helps everyone get smarter and make better products. But today, it’s just us.

Above: My work for CES started with pre-briefings like one with Avegant, the maker of the Glyph virtual display. #CES2014

GamesBeat: The Avegant Glyph, I saw, had about 40 or 45 degrees to the field of view.

Iribe: Yeah. Your brain still feels like you’re looking through a window. When you go to a 100-degree field of view, you start to feel like you’re actually in the experience. They’re built for different purposes.

GamesBeat: I wonder about some of the new curved-screen TVs we’ve seen here, too. The argument now is that if you sit 4 feet away, 5 feet away, you still won’t see pixels, so they can curve it around you.

Iribe: They’re trying to say that it’s a wider field of view. I don’t know. We’re excited about what TV and cinema is going to be like in VR, because now we can have a much wider screen. Palmer’s gone on record saying that VR can provide the least expensive way to get to the highest-quality large display experience. We’re not there yet, but in the future, imagine you can put on a VR headset and being able to get an extremely large TV – an IMAX, if you will – in your home or wherever you are. It’ll be both large and very portable, which will be a lot of fun.

GamesBeat: What’s in the demo you have here today?

Iribe: We have two demos. One highlights positional tracking, mostly. The other starts to highlight the low persistence. They’re fully featured in both, but in one, you’re more inclined to lean around and look around. 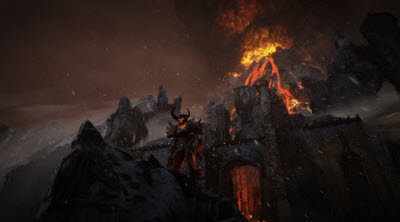 If you remember, back at E3, we showed the Elemental demo. Epic has now taken the Elemental demo and made a tower defense game inside it. They call it Strategy VR. You can sit down and see another player over on the other side of this virtual castle, where little gnomes walk around and your towers shoot at them.

The idea is that, in the future, the evil lord across from you could be your friend’s avatar, you could be some other avatar, and you could play each other in any kind of game. When you do this, you want to be able to lean in and look closely at the characters. You can imagine something like Jenga, where you need to lean around and decide where you’re going to pick the next piece. That requires positional tracking.

Epic stepped up. I can’t say enough about those guys. They’ve been awesome to work with, much like Valve. We’ve been working with Valve from the beginning with VR. We’ve been working with Unity. The Epic guys have really stepped up each time. They did it at E3, and here, they did it again. They made this demo themselves, working closely with us, for CES, just to show off Oculus at the show. They got it done over the holiday break, which is a lot to — we wouldn’t want to ask that of a partner. It was awesome that they volunteered. A couple of the guys worked through Christmas and New Year’s to get it done. It was a little hot at the end, but it came together, and it’s an amazing experience.

The second demo is EVE Valkyrie from Crowd Control Productions. You saw that at E3. You may have seen it at Gamescom as well. This is the same build from Gamescom, but we’ve added positional tracking and low persistence. They’re hard at work on a future version that will have all kinds of great new gameplay features. It’ll be a full-fledged game. But you can see the difference between the older version, without positional tracking and low persistence, and the new one. We can toggle on low persistence, and it makes the experience so much better.

Of course, we’re bullish on this. It’s not as if VR is going to be the only category of gaming in the future. It’s not necessarily going to disrupt other categories. It’s going to be another category. You’ll still have PC gaming and mobile gaming and console gaming, but now you’ll have VR gaming. It’s awesome to see some of these big triple-A developers – in addition to all the incredibly smart indies – getting in on the ground floor of VR. CCP, Epic, Valve has been doing a lot of R&D on it. They’re going to be at the forefront and they’ll be able to take advantage of that, having some of the content there at the very beginning. Launch content can have a fairly high attach rate if they make a great experience. David’s been working with those developers to make sure that they’re fully in line with the consumer launch.

DeMartini: What they’re most excited about are the new design possibilities of a full immersion environment. People have been kind of designing games the same way – with higher levels of fidelity, obviously – for a long time. Move forward, play through, move forward. With the virtual immersion environment, you can be far more subtle. Positional sound, in conjunction with the ability to see 360 degrees, gives them completely new possibilities for how they design. That’s what catches their attention.

UE4 is a great example of that right now. You’re in this crazy medieval fantasy world, sitting inside a throne, looking at a table that has the strategy game on it. The thing that excites me from the content side is the layers it adds, the realities within the reality.

Iribe: It’s a new canvas, a new level of immersion. You’ll hear guys like [BioShock Infinite creator] Ken Levine and the CCP guys talk about how one of their big goals is always to make a more immersive experience. Virtual reality is the next generation of immersion. You have things like audio cues that cause you to turn. It’s harder to do that in a game where you just look through a monitor.

If you look at where gaming has gone, you had board games in the beginning, and they were a lot of fun. They were social. Everyone enjoyed playing them. Then we got computer games. Computer games started out a little less social – you had two game pads at most – and then they became more and more social, for more and more players. From board games to computer games, you’re going to get this next major step into virtual reality gaming.