The folks behind Oyster, a new e-book subscription service, hope you’ll binge on books as ravenously as you devour Netflix shows.

The startup launched its platform in September, offering iPhone owners a chance to peruse more than 100,000 books for $10 a month. Then in October, the company launched an iPad app, doubling its subscription base “almost overnight.”

And today, Oyster announced $14 million in new financing, which it will use to expand to other platforms and grow the team.

“The all-access model for e-books is an innovation which we believe is here to stay,” Oyster CEO Eric Stromberg told VentureBeat via email. “This model is great for not only readers but publishers as well.”

Oyster has signed up more than 800 publishers, including HarperCollins and Houghton Mifflin, as well as smaller publishers like Perseus and Workman. Oyster pays them every time one of their books is read — based on the digital list price of the book — and they, in turn, pay their authors. 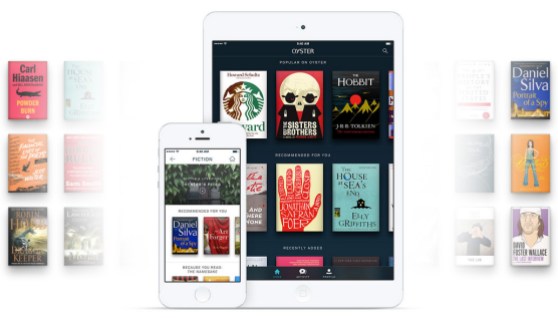 Oyster’s slick iPhone and iPad apps feature a social media connection that can share what you’re reading with your friends (and vice versa), as well as some nifty viewing options that go beyond just text size. Subscribers can download up to 10 titles at a time for offline reading.

The service is coming to “as many devices as possible” in the future, added Stromberg, beginning with an Android app that’s scheduled to release this year.

Oyster faces stiff competition from Scribd, which launched in 2007 as a digital documents library but hatched an e-book subscription service of its own in October. Scribd’s service is already available on iOS, Android, and web browsers — and it’s a dollar cheaper at $9 a month.

“It has become increasingly clear that as the ebook market matures, reading preferences will shift to unlimited subscription, and we’re looking to lead the way in that shift,” said Stromberg.