Silicon Studio wants to make the guy next to you at the local Pho place into a strangely named Ifrit.

The Nintendo 3DS’s StreetPass profile-sharing service has proven to be one of the handheld’s more addictive timesinks, and Silicon Studio is turning it into a core gameplay feature with Bravely Default, its self-described “really connected” 3DS Japanese role-playing game published by Square Enix. We recently sat down with Nintendo for a hands-on preview of Bravely Default: Flying Fairy’s free 10-hour eShop demo and the game itself, both of which have many opportunities to use StreetPass data.

Most of your time in the lengthy demo focuses on exploring a side narrative to the main plot, but StreetPass plays a key role in a village-building side objective. Tasked with restoring and upgrading various businesses and houses, players can drastically reduce the wait time for roofing an item shop or laying the foundation for an inn by attaching their friends’ StreetPass data to the project. 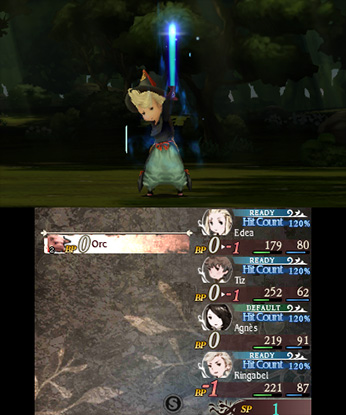 The number of StreetPass people put on a job gradually decreases the amount of time each homesteading task takes, whittling down a 10-hour grout-inspection into a 30-minute deal. Although regardless of how long or short a task may be, the timer will only count down while the game is turned on. But those with access to a lot of StreetPass pals can turn what could be a social media-style game of time gates and countdown clocks into a minigame of SimVillage.

Bravely Default doesn’t limit your friends’ StreetPass data to just demo-fodder, though. The full game treats the profiles of people you meet on the street like a summon. While in battle, characters may call on StreetPass profiles for a special one-time attack before tapping the player back into the Active Time Battle flow. You can execute these StreetPass attacks any time, and you access them through their own menu in the fight screen interface. This effectively treats your friend’s cameo as a particularly flashy special attack, dealing out significant damage before making their exit. It’s a one-time-use-per-meeting deal, however, so if you want Clippy45317’s help in the next dungeon, you’ll have to run through the StreetPass data exchange again.

With Bravely Default, we see the two most common StreetPass uses taken to the hilt: a socially driven objective in a demo’s side plot and an intrinsic part of one of the core mechanics. While hunting down your friends each time you want them as a special attack will likely become tiresome, making those you encounter in daily life into powerful — if temporary — allies is one of the more charming uses for the 3DS’s social features that we’ve yet seen.