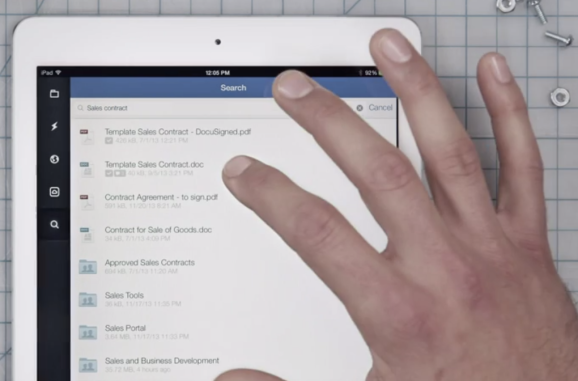 After Dropbox dropped the ball with an outage last weekend and left some users looking for a new file-sharing service provider, competitor Box is coming on strong today with a redesigned iOS application and a hefty 50GB of free storage for users who sign up in the next month.

The new app for iPads and iPhones boosts document loading speeds, lets users move and delete multiple files in one fell swoop, and permits previewing for more types of files than before, according to a blog post from David Still, vice president of mobile products at Box.

Box has also launched a new site, getonecloud.com, to show off mobile applications that can make use of the files that people upload to the service. Examples include CloudOn for starting or editing Microsoft Office files that Box can retain and iAnnotate for adding notes to files sitting in Box.

But the bigger news here is that Box is upping the amount of free storage it’s providing, even if it’s just for a limited time. It’s a predictable way for Box and other cloud storage vendors to keep competing with one another. Giving people large amounts of storage for free for eternity demonstrates Box’s determination to attract many more people — and mobile users specifically — to its service. That’s especially true now that Box is in a position to go public this year.

But major Box competitor Dropbox could file for a public offering this year, too. The most recent Dropbox outage could hurt Dropbox’s campaign to sign up more users and prep for an IPO. The outage might well have enticed some of Dropbox’s paying customers to give Box a try. The new 50GB storage promo is well timed, as it makes Box a more compelling proposition while Dropbox users might be considering alternatives.

Dropbox currently provides 2GB of storage for free, while Box ordinarily gives away 10GB of free storage. Those two companies are at the forefront of the cloud storage market, with their large user bases and options for businesses. Google is up there, too, with 15GB of free storage people can use for Drive file storage, Gmail for email, and the Google+ social service.

And the market includes many other vendors. A free trial for hybrid storage service Egnyte gives users 2TB, but the trial runs into a hard stop after 15 days, at which point interested users need to think about whether they want to pay. Another Box competitor, Droplr, recently announced the end of its free tier of cloud file storage and sharing, although unlimited storage is available for $4.99 a month.

Now those companies and many others are on notice to think about bolstering their free options.