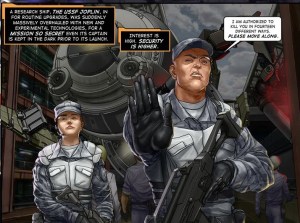 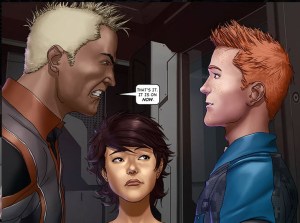 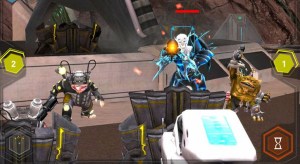 Seropian heard a lot of critics claim that mobile games could never live up to the console experience.

“When Bungie got bought by Microsoft, we got similar vitriol about making a shooter game on the console,” he said. “They said it wasn’t possible. Why would anybody want to play that? We said we know the kinds of games we want to play and that tablets are becoming fantastic pieces of hardware.”

“We wanted to focus on the strengths of the platform, to release ourselves from the tropes or rules of what it takes to make a traditional shooter great,” Harris said. “We started with the device.”

But the team had to do a lot of work, because “we weren’t happy with the virtual controls on tablets,” Seropian said. 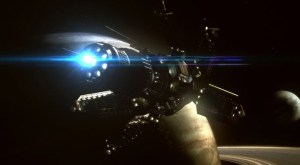 Above: A mining ship in Midnight Star.

In the game, you find yourself in the cockpit of the larger ship.You can move around from the bridge of the Joplin to the armory or other sections. In the armory, you can talk with the weapons officer and upgrade your gear.

When you make contact with the aliens, the fighting starts. To shoot an alien, you touch it on the screen. Your character aims, and a reticule appears on the creature. You hold it down to fire and use your finger to follow the alien as it tries to dodge or hide. If you hit the alien enough times, you kill it. You do this over and over until you clear a section in about two minutes. A short firefight enables you to set it aside and go on with your life, in case you don’t want to spend hours playing a single game session.

You use some of the 14 guns in different ways. You can pinch the screen, as if you were viewing a photo, to zoom in on a target with a sniper rifle. You tap the head to try to get a headshot. The more headshots you get, the greater the points you rack up. If you press two fingers on the screen, you lay down a shield to protect your character.

“This is where we chose to focus on what touchscreens do well,” Harris said. 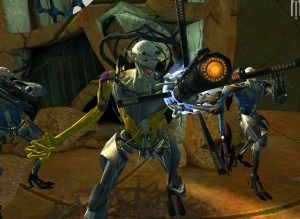 You can pull out tricks like a levitation power that makes the aliens float in the air. You can pick them off until the power wears off. The mechanics are simple, and they don’t require you to do things that are just too hard to do on a touchscreen.

The game will debut with a large chunk of the story, but Industrial Toys will keep coming up with content over time. The game’s modes make the title replayable, too. In hardcore mode, you have to get more than 30 headshots in a round. In psychotic mode, you have to play flawlessly.

In multiplayer mode, you can send challenges to friends and share your results of missions. You can modify a level and issue a challenge for a friend to play it at your direction. For instance, you may have to play with no shields. In one kind of challenge, you may get three chances to clear a level. If there are four people in a challenge, the winner takes all. If you win, you nab the jackpot of resources that are at stake.

You can use your reward currency from playing to upgrade your gear. You can also purchase a different kind of currency to buy premium gear. You aren’t required to pay real money to win or beat friends. Industrial Toys has invested heavily in the communications features, like chat, so that it can build a community worthy of a major shooter game.

Midnight Star offers all sorts of rewards that are meant to give you a smile and keep you engaged. You unlock features on guns and level them up, just like a character. You can eventually get goodies like a shotgun that can chain lightning bolts together. 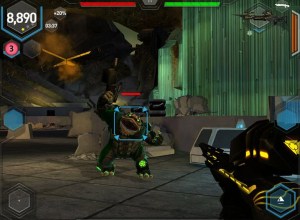 Seropian said he is about 25 hours into playing the game. If people keep playing and buy stuff, Industrial Toys will have a hit on its hands. The odds are tough, but if the game gets a lot of engaged fans, those fans will eventually lead to monetization. And once that happens, Industrial Toys will have a long-term sustainable game on its hands. The company will be able to continuously invest in it.

It’s been a lot of work so far. The team has grown to 18 full-time employees and is working with the console-born Unreal Engine 3 game engine. Seropian has raised money from angels.

Midnight Star is in beta testing now and it will launch “soon.” I’m looking forward to whether Seropian, whose Halo games have sold more than 50 million copies worldwide and created a multibillion-dollar entertainment franchise from Microsoft, can do it again on mobile.

“It’s a free-to-play game and our value proposition is different from a paid download,” Seropian said. “We have to build a place for people to hang out. The challenge is getting them to stay.” 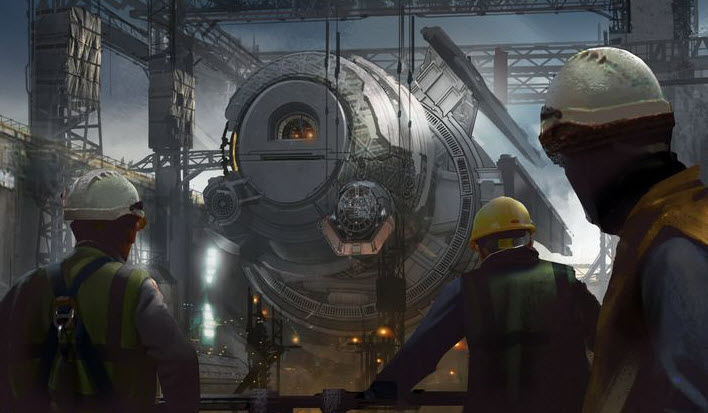 Above: An artifact? This can't be good.