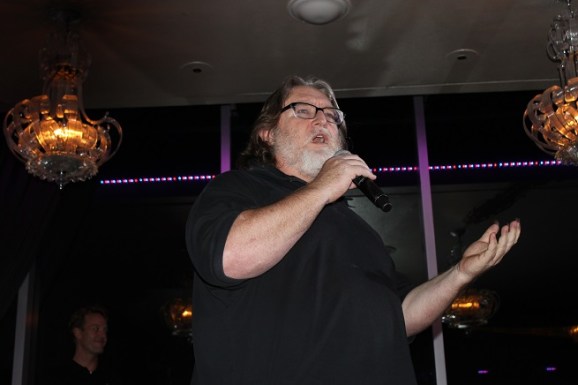 Valve‘s Steam Dev Days conference is off-limits to the press, but this “no media allowed” policy isn’t preventing information from leaking out on Twitter.

Today and through tomorrow, Valve, its partners, developers, and publishers are in Seattle to discuss PC gaming and the Steam platform. That includes the new SteamOS operating system, the upcoming Steam Machine PCs, and the Steam digital-distribution store.

As part of the event, Steam revealed that Steam now has 75 million registered users. That’s an increase of 10 million since the company last reported that figure in October.

That’s not the only interesting factoid and tidbit coming out the conference. We’ve gathered up some tweets from developers that are attending the event.

In addition to its Linux-based SteamOS and the console-like Steam Machines, Valve also has its Steam Controller. This new input device forgoes traditional analog sticks in favor of a pair of concave trackpads.

Now, Valve has revealed that third-party peripheral makers can make their own versions of the controller.

3rd parties will be able to make Steam Controllers #steamdevdays

Steam Greenlight will ‘go away’

Valve currently has a service on Steam that enables indie developers to put their games on the store if they get enough support. This is Steam’s Greenlight platform, but it doesn’t have long to live.

Valve president Gabe Newell told the assembled crowd of developers that they want to get rid of Greenlight.

“Our goal is to make Greenlight go away,” said Newell. “Not because it’s not useful, but because we’re evolving.”

Evolving into what? Well, an even friendlier platform for smaller studios. Valve wants to remove all the measures that are currently preventing tiny developers from publishing their titles on Steam. We’ve reached out to Valve to ask how that will work, and we’ll update as we have more.

If Valve’s SteamOS (the Steam Machines’ software backbone) gets any exclusives, they won’t seem out of place.

Exclusives for @steam_games will be natural and not forced. #steamdevdays. Just gets better.

Newell said that SteamOS will get experiences that are unavailable anywhere else, but Valve also confirmed that it won’t try to force a game into SteamOS exclusivity. That means if a game ends up only on SteamOS, it’s likely because the developer wanted to make a game that is specifically geared toward television and couch gaming.