Every year, the electronics and computer industries gather in Las Vegas for International CES, a gigantic tradeshow where they show off their wares for the coming year.

Getting through the 2014 International CES wasn’t a cake walk. We trudged for miles inside overheated convention halls, braved buffet lines, and saw some spectacular demos. We tried to see as many of the products as we could among the 3,200 exhibitors, and we did combat with the 150,000 attendees who were trying to butt in front of us in lines.

We survived CES, just barely, with 50 percent of our staff leveled by convention illness. But despite that heavy attrition rate, we’ve come up with our view of what we liked best at CES. These are the products we are most looking forward to in the coming year.

By comparison, here’s our list from last year’s CES. 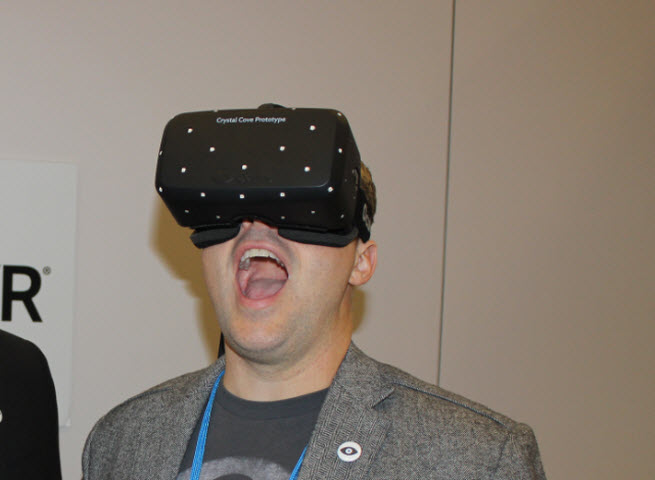 Virtual reality can make you seasick. Oculus VR has been fighting this conventional wisdom for the past couple of years and it is now doing something about it. With its latest “Crystal Cove” demo of its virtual reality goggles, the Oculus Rift prototype felt pretty good. The demo featured positional tracking, so you could now move your head about in any direction, and low persistence, or some technical tricks that eliminate motion blur when you turn quickly. Both of these features take the experience one step closer to true virtual reality and a gaming platform that you can enjoy for more than a few minutes. Oculus still has a way to go. But it has generated a lot of interest from the gamer and developer communities because it offers cool new technology that brings something different to the table. — Dean Takahashi

While Sony CEO Kazuo Hirai only briefly mentioned this gadget during his CES keynote, it instantly got my mind spinning. It’s a projector that you can place right up against a wall or screen to produce a giant, glorious 4K image. Unlike traditional projector setups, you won’t have to deal with a complicated installation or people jumping in front of the projected image, because it sits so close to the wall.

Expect that cost to fall dramatically over time, though. Once short-range projectors are inexpensive and readily available, there won’t be much of a need for 4K TV sets. — Devindra Hardawar 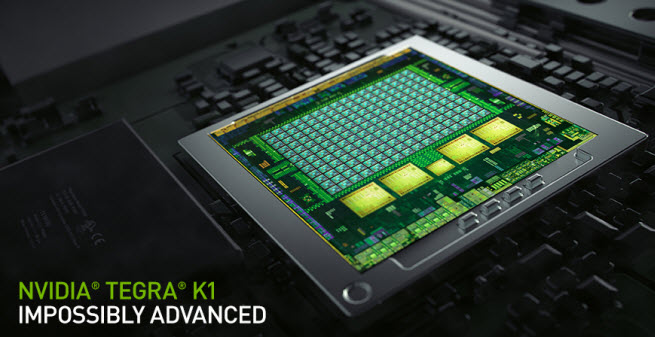 Mobile computing and graphics are moving on an accelerated path, and that was evident at Nvidia’s press conference, where it unveiled the Tegra K1 mobile processor. This chip has 192 graphics cores and had both a 32-bit and 64-bit version that could run games based on Epic’s Unreal Engine 4 game engine. That means that mobile devices will be able to run state-of-the-art games that are designed for today’s consoles and PCs.

In demos, Nvidia showed that it could run the finest visual effects like translucency, high-dynamic range (cool lighting and shadows), water warping, realistic glowing skin in human characters, and more. In creating Tegra K1, Nvidia is closing the gap between what the best consoles can do and what the best mobile devices can. Already, the Tegra K1 has faster performance than a PlayStation 3 or an Xbox 360.

This kind of technological advance lays the foundation for developers to create a whole collection of exciting new games. — Dean Takahashi 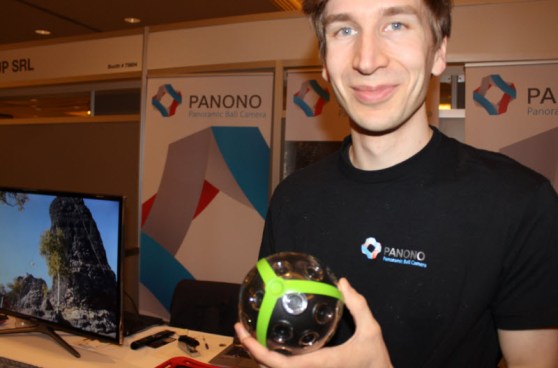 Above: Jonas Pfeil of Panono, which makes a ball that shoots 36 pictures at once.

Panono is a clever way to capture a new kind of 360-degree panoramic image. It is a ball with protective casing and 36 cameras pointing in all different directions. You toss it in the air and each camera snaps a photo when the ball reaches the highest point in its trajectory. Then it sends all 36 photos off to the company’s servers, which stitch it into a panoramic image that you can view on your smartphone.

The picture resolution will be 108 megapixels, and it will take pictures with features including high dynamic range (HDR), a term for images with both bright and shadowy details at the same time.

The company just raised $1.25 million on Indiegogo, blowing past its goal of $900,000. It will debut in September for $499 for campaign supporters and $599 for everyone else. — Dean Takahashi

Above: Valve’s Steam Controller with trackpads that replace thumbsticks. It makes it possible to play PC games in the living room. #CES2014

Valve, the owner of the Steam digital game distribution service and the maker of Half-Life, launched its Steam Machines living room game console project with 13 partners at CES. The company is making its own Linux-based Steam OS to run Steam-based games. But at the heart of its effort is an innovative game controller. The controller gets rid of the dual analog sticks in favor of two track pads with tactile concentric rings. It enables PC gamers to comfortably play mouse-and-keyboard games with a controller on a big-screen display in the living room. If gamers take to it, then Valve can start converting its 65 million Steam customers to play games in a new part of the home. And that will provide some much-needed competition in game consoles. — Dean Takahashi

We can dream about fancy short-throw projectors, but Vizio has actually managed to deliver a 4K TV set that’s actually affordable. Its 50-inch P-Series 4K set will cost you only $1,000 — a price that could easily sway buyers away from low-cost 1080p HDTVs. And if you’re willing to spend a bit more, you can grab a massive 70-inch 4K set for $2,600. — Devindra Hardawar 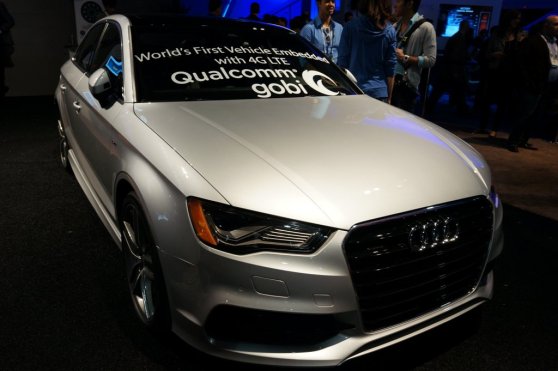 In this car, we can see the future of driving. Just like last year, Audi had a new self-driving concept car to show off at CES. But this year, instead of having a trunk full of components, Audi was able to fit the car’s brains in a single circuit board the size of an iPad. That’s progress.

The concept car, which can drive itself in typical street traffic, also served as a prime example of how mobile technology is infiltrating car tech. It’s powered by Nvidia’s Tegra K1 processor and Android, and it also has LTE connectivity from AT&T. — Devindra Hardawar

Even though our laptops have become thinner and lighter, the lowly power adapter remains surprisingly bulky. Finsix’s tech could change that: the startup has created a 65-watt laptop charger that’s about a third of the size of today’s devices.

That may not sound very exciting, but it has the potential to transform the way laptop power adapters (and plenty of other power chargers) are built. And who wouldn’t want a tiny power adapter to go alongside their super-slim laptop? — Devindra Hardawar 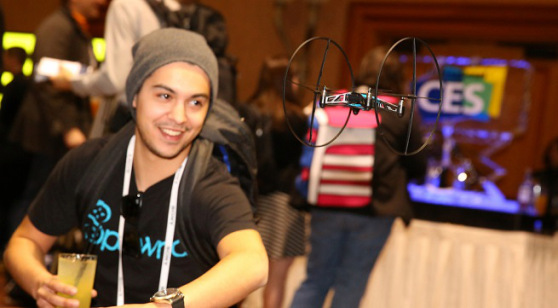 Parrot brought us the cool quad-rotor AR Drone a few years ago. Now it has unveiled two new drones, including the Parrot Mini Drone.

You can control the Mini Drone with your iPad or iPhone, via a Bluetooth connection. It has some very strong rotors that can lift it up and make it hover off the ground. It can also roll down the hallway at a high speed. Battery life is a little weak, as it can only fly for six minutes. But that’s enough time to surprise someone.

The Mini Drone will debut later this year. Its price hasn’t been set. — Dean Takahashi

Wearables were hot at CES, but not all of them make sense. Basis Science is selling one of the most expensive fitness bands on the market, with a price tag of $200. But its new version, the Basis Carbon Steel Edition, stands out from the crowd because it looks sleek and it offers analytics that no other band can do. Basis has a multi-sensor approach, with sensors that detect your heartbeat, sweat, and movement. It can determine if you are sleeping, biking, walking, or running.

Basis then takes that data and analyzes it on its cloud-based web platform. Soon it will be adding in-depth sleep analysis, telling you exactly how many minutes you spent in light sleep, REM (rapid-eye movement) sleep, and deep sleep. It will make recommendations to you based on those analytics and set goals for you to pursue.

While other bands make look prettier, Basis gives you data that you can act on and a long-term view of your health over time. — Dean Takahashi

Please take our poll on the best gadgets below, and leave a comment about your own opinion.