The third and final installment in Square Enix’s spin-off trilogy to its Final Fantasy role-playing franchise (due out Feb. 11 for Xbox 360 and PlayStation 3) restores ex-soldier/pariah Lightning as the protagonist, this time with a closet full of deadly armor. These armor collections — dubbed “schemata” — number in the dozens and offer much more than style. We’ve had a few weeks to mess around in the game and have since learned to take dressing up seriously.

Schemata can be bought, discovered in the world, or dropped from certain encounters. Lightning has a rotating set of three schemata available in battle at all times, and players actively switch between them to exploit enemy weaknesses. Another handful of armor sets can be selected as an alternate roster to help cut down on time spent in menus. On paper, this sounds eerily similar to a tactic employed by Square in another of its direct Final Fantasy sequels, Final Fantasy X-2. But unlike the further adventures of Yuna and company, the schemata system in Lightning Returns requires a bit more effort from the player.

Once acquired, each schemata holds slots for a sword, shield, two accessories, and four abilities. Most are geared toward a specific discipline — specialized in defense, offense, or magic — but there is no restriction on which abilities or weapons can be attributed to a schemata. Each piece of armor does come with a couple of slots locked with preselected abilities, however. For example, the Black Mage schemata is balanced for magical offense, with a high pool of magic points and two magical attacks locked in. Players can equip the armor with the heaviest of shields and defensive maneuvers, but it won’t get them as far as gearing up for more offensive tactics. 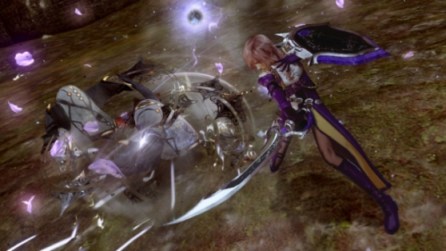 Above: Fear my fashion sense!

Lightning gains small increases to her strength, magic, and defense through the usual quest-completing/monster-destroying routine, but abilities themselves do not level up. Instead, they are either found or bought before attaching them to a schemata. Multiples of the same ability can be synthesized to produce a stronger version as long as both copies are at the same level. Matching your ability and weapon set to each armor’s strengths is key as Lightning Returns’ default difficulty requires some significant battle strategy.

The occasional mission requires you to equip a certain schemata during it, but for the most part, Lightning wanders the world in whatever armor set the player selects as default. And if the urge to perform a makeover arises, each schemata bears a host of color options that you can change at will. Lightning also acquires dozens of adornments, or cosmetic accessories that bear no effect in battle but can add a personal touch. Going through the story’s cutscene-heavy campaign with a miniature tree on Lightning’s head has its own little charm.

In the race to diversify the battle system, Square Enix decided to make looking good deadly. Swapping between preferred schemata mid-battle is a satisfying high note to combat. Unlike Square Enix’s previous attempts at getting players to battle in dresses, the schemata feel more like natural extensions to combat. And with a multitude of aesthetic accessories at the player’s disposal, there’s a definite benefit to embracing your inner fashionista.