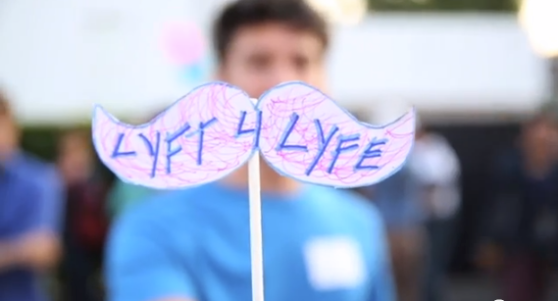 Lyft supporters at a rally in Los Angeles

In San Francisco, where Uber and Lyft got their starts, resistance to these services seems futile.

While taxi drivers may be striking against the “unfair competition” in Paris, one-third of cabbies in San Francisco have ditched their registered cabs. These drivers are now working for Uber, Lyft, or Sidecar, Fortune reports.

Uber has come a long way since its founding four years ago, but it still faces legal complications and local resistance. Earlier this week, the heated rivalry between taxi drivers and Uber turned violent when striking drivers attacked a car booked through Uber in Paris.

Uber chief executive Travis Kalanick recently said that he often forgoes sleep when “two or three flareups happen in the same week,” and he has to fight regulators who “propose laws that would put us out of business.”

Challenges aside, Uber is experiencing explosive growth. The company is doubling its revenue every four months, and it now operates in 35 cities. Customers are loyal to the service, as it’s an alternative to standing on a street corner flailing an arm for a taxi.

MORE: Uber & Lyft have a secret weapon in the fight for regulatory approval: You

According to Fortune, the San Francisco Municipal Transportation Agency is finally taking action to work with these new transportation apps. To meet the demands from a growing population, the agency plans to increase the number of medallions (permits to operate a cab) to 2,100, up from 1,500 in 2012.

These new drivers may discover that new technology isn’t the enemy. Fortune reports that a new app called Flywheel is helping cabbies find people in the city who need a ride in real time, which increases their productivity.