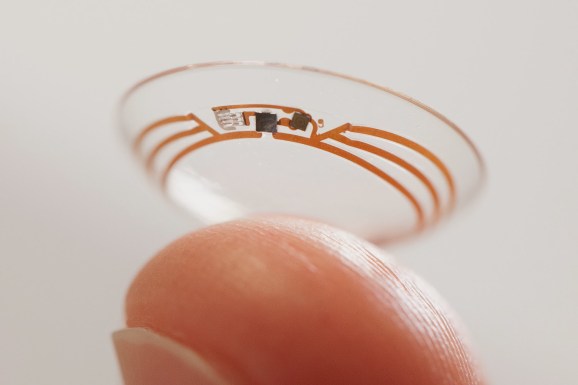 Google just took its wearable project to a much smaller level — like, eyeball-sized smaller.

The company announced today that it is creating a contact lens packed with sensors and an antenna that will help people with diabetes. Google says that the contact lens may one day be able to replace the action of pricking your finger in order to measure your blood glucose level — a necessity for those living with the disease. A diabetic person needs to know the glucose level in their body in order to regulate how much insulin they take as they eat throughout the day.

But scientists are looking into other bodily fluids that could indicate these levels and not require the continual pricking of a person’s fingers. Tears, as it turns out, might be one of these fluids.

“At Google[x], we wondered if miniaturized electronics — think: chips and sensors so small they look like bits of glitter, and an antenna thinner than a human hair — might be a way to crack the mystery of tear glucose and measure it with greater accuracy,” the company said in a blog post.

The wireless sensor and a “miniaturized” glucose monitor are sandwiched between regular contact lens material. The product has already completed a series of clinical research studies, and Google says it is “in discussions with the FDA” for regulatory approval. If the monitor is successful, Google may also include LED lights in the contacts to warn customers that their blood glucose levels have surpassed safe levels.

Google[x] is the company’s experimental wing, also birthed the digital eyewear Google Glass. The contact lens project’s cofounders Brian Otis and Babak Parviz explained in the blog post that the brand has always said it would “seek out projects that seem a bit speculative or strange.” We agree, though, this one’s also kind of awesome.