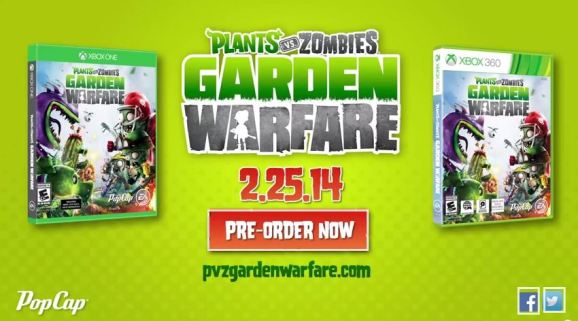 Plants vs. Zombies: Garden Warfare gets a new date.

One of the next big Xbox One games is gonna need a few more days of sunshine before it’s ready to bloom.

Publisher Electronic Arts revealed that Plants vs. Zombies: Garden Warfare hits Xbox One and Xbox 360 on Feb. 25, as first spotted by IGN. That is a week later than the original release date, which EA previously announced as Feb. 18.

We’ve reached out to EA and PopCap to ask why they decided to push the release back a week.

Plants vs. Zombies: Garden Warfare is a third-person shooter that has players taking the role of vegetation in a co-operative online environment. It also has a mode that enables players to face off against one another. In that competitive gametype, one team plays as the undead.

This is the first fully 3D game from Peggle and Plants vs. Zombies developer PopCap. The studio is using the same graphics engine that runs EA’s popular Battlefield 4 shooter — although Garden Warfare has a much more colorful style.

For now, Garden Warfare is a Microsoft exclusive, but a PC version is also in the works. EA and PopCap have not specified whether they will release the game on PlayStation 4.

This is the second of three games that EA is releasing on Xbox One that is not simultaneously hitting the PlayStation 4. In December, PopCap released physics puzzler Peggle 2 exclusively for the Xbox One. In March, it plans to launch the mech-based shooter Titanfall for Xbox One, Xbox 360, and PC. While Peggle 2 and Garden Warfare could potentially hit a Sony system or even Nintendo system, EA and Microsoft have agreed to full exclusivity for Titanfall, which means the first game in that franchise will never see a release on PlayStation 3 or PlayStation 4.