Storehouse wants to sell us a dream. It’s that quintessential 21st century promise, an opportunity to democratize the storytelling experience and grant Jane and John Does around the world the means to collate idle smartphone-camera snaps and jotted thoughts into living, breathing stories.

It’s an app, of course — iPad only, for now. And Storehouse isn’t actually selling anything; the app is free to download and use, and it’s launching on the App Store today. Here’s the important bit: It looks gorgeous, is blisteringly fast, and incredibly user friendly, and at (admittedly brief) first blush, it looks poised to shake up the personal-content creation game for good.

“Storehouse is what we call a visual storytelling platform,” says cofounder Mark Kawano, part of the San Francisco-based, nine-person team behind the app. On the surface, it’s a bit like Tumblr on steroids: user accounts consist of great big images (or video) lovingly married to text, and everything is scrolled through with a careless flick.

And gosh, it’s pretty. To be fair, most of the folks in the app’s closed beta appear to be DSLR-savants, blessed with optimal lighting and an eerily perfect grasp of bokeh. Tales of basket-weaving, polar ice caps, and fruit jelly preservation (Kawano is a bit of a foodie) flit by on an interface a smooth as glass. And then there’s the occasional video: still and moving images are equal in Storehouse’s eyes, and my stoic attempts at formulating piercing questions while Kawano showed off Storehouse’s content were often interrupted by a sudden whoa, raindrops or hey-look-at-that-dog!

What do you do with videos?

This nigh-overwhelming aesthetic is tied to what Kawano calls “the new vernacular” — smartphones and their ilk have acclimated us to a world that’s readily documented, and the miniature wunder-devices that we tote around everyday readily capture all manner of photos and videos.

But then what? Shuffling stuff off to Instagram, Twitter, and Facebook I guess; I’m a bit partial to Google+. Wherever we post, the captured minutiae of the comings and goings of our lives become just that, minutiae. Our stories — and that’s the key idea here — become mere snapshots, lost in the post-processed stream of everyone else’s sandwiches or idyllic trips.

Storehouse is aimed at something a bit different, with a focus on storytelling, and not necessarily sharing media or status updates. Stories are created on the iPad app, with content uploaded to your iPad from Flickr, Instagram, Dropbox, or your iOS camera roll. The app will support images up to the iPad retina-resolution of 2048-by-1536 pixels, and any videos that will play on the iPad natively. Storehouse’s WYSIWYG editor tackles content with aplomb; it’s admittedly kind of stunning to drag photos about, size and crop them, and tap in some text without bumping into intrusive interface elements or lag. It all just works, and it’s a painless — even fun — process.

Videos are treated with the same gravitas as an uploaded image, which is icing on the cake — in measured doses, of course. Videos on Storehouse are capped at a mere 30 seconds; anything longer simply can’t be uploaded to the app.

Of course, that’s ages in Vine-time, and in a certain light it’s a constraint that can open up a whole realm of possibilities for creativity. “If I was to download this on YouTube, or Vimeo, it would be really boring” Kawano remarks, as a video of a pair of legs in tight-fitting trousers marches endlessly down a barren set of railroad tracks. But scroll past the story’s cover into the piece itself and you’ll see the bigger picture, a blend of text, video and imagery that just works well together.  Fret not: while videos will play automatically and loop endlessly, they only play audio when they’re in the foreground, skirting annoyance issues. 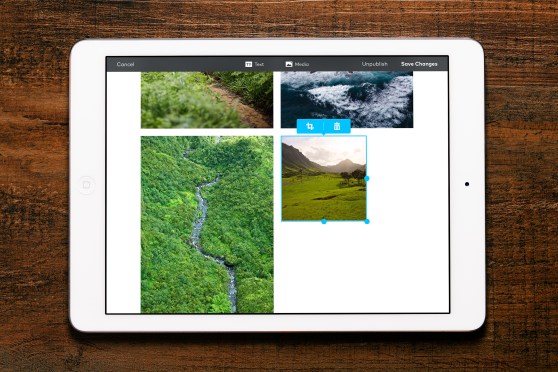 Above: Drag and drop images at your leisure.

Storehouse isn’t just trying to be yet another container for high resolution photos and video, though. The developers have taken the lessons of the print world to heart: “With magazines, you don’t think about flipping the page; it’s just natural.” That lends itself to immersion, and the breathless sort of fascination we once might have had with glossy print media. With a magazine, and ostensibly with Storehouse, design is never static. As Kawano puts it: “there’s an element of visual surprise every time you change the page … it’s consistent, but not everything looks the same.”

To that end, the Storehouse app offers a great deal of control over the layout of a story, but much is left up to the app — as far as the designers are concerned, you’re largely incapable of mucking things up. Images can be sized and cropped at your leisure, but arranged several side by side and they’ll always snap into a sensible sort of grid.There are only  three text styles — “normal” text, headers, and quotations — and no option to choose a font or color. A block of text also automatically spans the width of a page, preventing the creation of columns or images bracketed by text: When you publish a Storehouse story it’s immediately transformed into a dynamic HTML web page, and keeping everything simple prevents things from breaking when they’re viewed on different devices with different display sizes.

While there’s a bit of a lack of choice — especially if you’re a stickler for fonts — the end result is still varied: Some of these beta testers are doing some crazy things with photo layouts and general presentation. But it still promises to look rather clean and consistent, on a tablet or phone or PC browser. The entire experience is also devoid of much in the way of interface, so the same rules apply everywhere: Just keep scrolling, and you’ll eventually reach the end of a story, and pop right back to where you started.

The end result is something like a cohesive social network, even if not treated as such. Everyone who creates an account gets their own little “hub” for stories, and you’ll have the option of following creators you’re particularly interested in and seeing the new content they have to offer. It’s a bit of an artsy Wild West at the moment — in my eyes-on demonstration, a National Geographic photographer’s stunning imagery of polar ice caps gave way to a video guide on making the perfect sunny-side up egg. But this is all part of the personalization experience that Storehouse hopes to optimize. In addition to picking folks to follow, there’ll be a steady stream of quasi-curated content from prolific or noteworthy creators that you can thumb through at any time.

Is Storehouse perfect? Not really. While you can view your stories anywhere, you’ll only be able to contribute to Storehouse if you own an iPad — something that’s bound to rub Android fans the wrong way. I for one would love to see a desktop publishing option — I shudder at the thought of trudging through my Lightroom catalog just to export images to a Dropbox folder. And typing reams of text would be far easier with a proper keyboard, though I suppose being a little terse is part of the app’s mystique — though nothing is stopping you from pasting text you’ve written in Google Drive or some other cloud-based word processor. There’s also no way to create private stories, or feeds to share with select groups. Kawano told me that “it’s something we’re definitely considering and want to offer at some point,” but everything you post is open to the general public for now.

How does it compare to platforms like Exposure? Not really a fair question: Exposure is a full-blown, photo-sharing content-management system — albeit one that can cost up to $9 a month. Storehouse is aiming for decidedly different territory — the average, iPad equipped person who may have a story to tell. The audiences will undoubtedly overlap, but it remains to be seen how dramatically this sort of thing will take off. I’ll admit, my interest remains piqued. Pop over to Storehouse if yours is too.