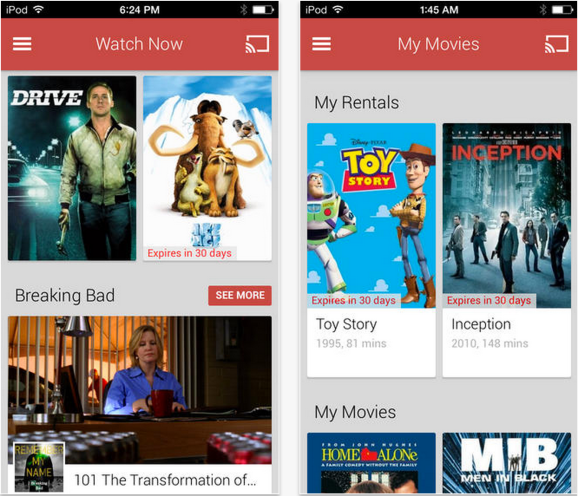 Google’s newest iOS app is out, bringing iPhone and iPad owners an alternative to iTunes and other services when it comes to watching media on their devices.

The app, Google Play Movies & TV (yes, that’s the name), enables iDevice users to watch movies and shows purchased through Google Play via Wi-Fi. It also has Chromecast support, giving owners of the $35 streaming stick another way to beam content to their TVs. It runs devices that support iOS6 or iOS7.

Owners of both iOS and Android devices may especially appreciate this release. Google’s media apps, including Google Play Music, is an easy way to sync media between different mobile operating systems. This feature is not part of iTunes, Apple’s native media player.

However, there are a few caveats. You can’t buy movies or shows from the app, as Apple doesn’t permit software that sells its own content on the App Store. Instead, you must take the clunky extra step of purchasing content from a web browser. Additionally, you can forget about storing your movies for a long flight, as the app has no offline support.