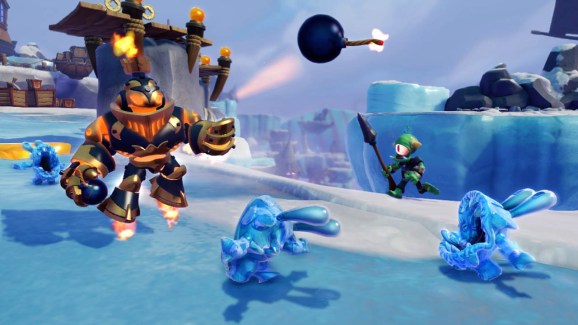 Hook ’em while they’re young. That strategy worked on me when it comes to games, cereal, and the work of Liza Minnelli — Disney and Activision are attempting the same strategy with their premier kids gaming franchises.

When taken as a single franchise, Skylanders came out on top.

“For the second year in a row Skylanders was the No. 1 top-selling kids video game franchise,” Activision Publishing chief executive Eric Hirshberg said in a statement.

Disney Infinity and Skylanders are both games that combine digital releases with interactive toys. Activision built this popular genre, which immediately caught on with children, when it debuted Skylanders: Spyro’s Adventure in 2011. Retailers like GameSpot, Walmart, and Toys “R” Us now all keep a significant amount of shelf space for Skylanders/Disney Infinity games and toys.

While it may seem unfair to compare Disney Infinity to three Skylanders releases, it’s clear that this genre is a bit different. The games drive toy sales. The more games in homes with families, the more people will want the physical toys, and December belonged to Activision’s brand.

“Despite competition from Disney Infinity, December 2013 was the best month ever for Skylanders’ interactive-gaming-toy sales on a dollar basis,” The NPD Group market analyst Liam Callahan said in a statement.

This doesn’t mean that Disney Infinity flopped. It was the 10th-best-selling game for all of 2013. No Skylanders title made that list.

While Skylanders is still growing, Disney Infinity was definitely a big part of making that number grow.

Of course, when you’re talking kids and gaming, it is important to remember Minecraft. Developer Mojang’s open-world building-block title had another huge year.

The indie phenomenon, which had sold 20 million copies on all platforms as of January 2013, has now sold more than 33 million across every platform, according to the company’s last report in September. It sold more than a million of that on PC as well as a huge amount on mobile and Microsoft’s Xbox Live Arcade for Xbox 360.

Even more surprisingly, the retail-disc version of Minecraft for Xbox 360, which came out more than a year after the title debuted on Xbox Live Arcade, was the ninth-best-selling game at retail in 2013.