Biotech firm Illumina sent shockwaves through the biotech industry this week by unveiling a new machine that it says can sequence a full human genome for $1,000. Until Illumina came along, it cost approximately $5,000 to sequence the human genome, a price that puts the service out of range for many patients.

Illumina’s supercomputing machine, which is a combination of ten machines working together and is called the “HiSeq X Ten,” is available to purchase at a starting price of $10 million. This is too expensive for most labs, but three of these machines have been acquired by Macrogen, The Harvard-MIT Broad Institute in Cambridge, and the Garvan Institute of Medical Research in Australia.

The new machine is designed to sequence thousands of genomes each year for $1,000 a pop. At that price, an institution could expect to recoup the cost of purchasing the HiSeq X Ten in about five years, exclusive of operating costs. That may be a reasonable proposition for providers that can afford to pay the initial purchasing fee. However, while the $10 million price tag takes into account the cost of the machines and the chemicals needed to do the sequencing, it doesn’t account for overhead, such as power, data storage, and labor.

Full-genome sequencing is much different from the DNA sequencing offered by commercial outfits like 23andMe, which focuses on identifying short genetic sequences within a person’s genome, not on sequencing the entire genome.

The first crop of customers purchasing Illumina’s machine might opt to charge patients more than $1,000. However, by keeping the price tag low, they should be able to reach a mass market who will pay out of pocket to sequence their whole genome for the purposes of medical testing.

At the J.P. Morgan Healthcare Conference, Illumina also unveiled a desktop-sized, $250,000 machine called the NextSeq 500, which is designed for the lab and can handle just one genome at a time. It can only handle some of the most common sequencing operations. The company said this machine would reach customers in March.

Less than a decade ago, it cost over $250,000 to sequence a single human genome. The industry is moving so quickly (it has outpaced the famous Moore’s Law) that the X Prize Foundation recently cancelled its $10 million competition. X Prize organizers realized that geneticists did not require the financial incentive to innovate in the field of next generation sequencing. 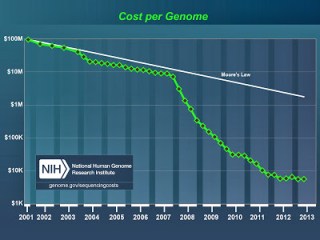 With its new machine, Illumina has outpaced its chief rival, Life Technologies. Life announced a year ago that it would be capable of sequencing the code of a human cell for $1,000. However, this announcement proved premature, as technical glitches prevented the company from actually selling its own machine. That machine’s price was set at $149,000.

“The HiSeq X Ten should give us the ability to analyze complete genomic information from huge sample populations,” said Eric Lander, founding director of the Broad Institute and one of the world’s leading geneticists, in a statement. “Over the next few years, we have an opportunity to learn as much about the genetics of human disease as we have learned in the history of medicine.”

Scientists have pointed out to Forbes that it will take some time before consumers can buy their genome for $1,000. Another grievance is that Illumina hasn’t factored labor costs into its price. In addition, storing raw data will set back customers tens of thousands of dollars. Computational scientist Glenn K. Lockwood estimates that the cost of being able to store four weeks worth of HiSeq X 10 output will run about $60,000 in capital (this calculation is based on the best rate for purchasing high-performance parallel storage hardware at around $0.30 per gigabyte.)

That said, industry reactions have been largely positive. Merrilyn Datta, chief commercial officer for biomedical firm Definiens and a former marketing lead for Life Technologies, said this announcement will usher us into a new era of personalized medicine.

“You need to have extensive population correlations from the genes to really drive towards personalized medicine,” she said. “To get us to the next step, we really need more people to have their genome sequenced.” Today, only about 100,000 genomes have been sequenced.

Datta is optimistic that in the ten years, millions of babies will have their genomes sequenced at birth. With this drop in price, reimbursement won’t be such an obstacle for patients. The low price of genome sequencing means that many more people can afford to pay out of pocket.

Researchers will soon have access to exponentially more data to use in their analysis of how genetic variations manifest themselves in diseases.

Today, scientists have only discovered a small number of positive correlations between genetic mutations and a person’s likelihood of contracting certain diseases. In the near future, biotech firms will begin developing more accurate diagnostic tests and targeted drug therapies. Datta believes that oncologists will no longer rely on a “trial and error” approach to cancer treatment.

In the coming years, Illumina intends to diversify its hardware and continue to reduce the cost of its sequencing machine. The company is also investing in analytics tools to rapidly process genetic information.